So another week has rolled by with not much happening. There does seem to be a downward trend with his aspirates, but chickens… counting… not.

One thing that has been achieved is getting the consultant, dietician and ward manager to all sit down and agree a plan with me. Trust me, this is impressive. Principally that no one will touch the feed rate (for fear of making his gastric aspirates shoot up again) and they won’t transfer us to the local… this isn’t one I’m particularly confident about, but I did get them to agree that they couldn’t see why I couldn’t go to the patient hotel instead and pop in for ivs as and when needed and both ward rounds in the day.

I also had a long conversation with his gastro consultant… again you should be suitably impressed at this, they are a rare breed, seldom seen in their natural habitat, who is adding in more medication to try and kick start things and has suggested a repeat EGG to see what his stomach is doing. That’s happening on Monday.

Dominic’s surgeon is now on holiday for two weeks so we’re under his reg who has a slightly different take on things. The reg did start saying that perhaps we should start talking about long term management at one point this evening. If I could have got away with sticking my fingers in my ears and singing “laaa laaa laaa I’m not listening…” I would have done. Everyone has a different idea though, so much so that a lovely doctor that we’ve got to know had it out (in a polite, controlled and firm manner) with the ward manager during the grand rounds about who was actually to make decisions about Dominic’s care. When they’ll learn to just listen to the parent I don’t know… at least Dominic’s consultant does these days, but his reg will be a harder nut to crack. They keep suggesting clamping his gastrostomy to stop the drainage, but I keep saying no, as the fact that he is comfortable and happy is what is keeping me sane.

It will be four weeks on Sunday since our incarceration started, and I’ll have to face the fact that our last chance at going away this summer is about to slip through our fingers. Another crushing blow to deliver to Lilia and Elliot.

At least I’ve managed to achieve one fun thing this week. I took them to a theatre in Leicester Square to see the Go! Go! Go! show with the help of my mum. They seemed to enjoy it, although they were all so shattered they weren’t exactly bouncing around. I was asked if we minded them filming the children (purely because of the wheelchair I’m sure) and it will be interesting seeing the end results (the guy gave me his card afterwards and told me to email him).

I’m also trying to arrange getting weekend leave, but Dominic is going to need ivs tomorrow as he’s going to be 0.7 (on the 1ml per kilo per hour calculations over 24 hours for his urine output) by the time he wakes up. Renal said to not let him go under 1 without rehydrating. We’ll see what the doctors say in the morning.

It would be great to surprise them by turning up, but horrible leaving again 🙁

They have all been so cheered up by the amazing post sent to them through the Post Pals charity (if you have never heard from it, please check it out http://www.postpals.co.uk ) including three amazing pillow cases personally made for them. They are all so isolated from normal life at the moment, Elliot and Lilia especially aren’t having hardly any contact with their friends (but enormous thanks to those who have stepped in to give them some normality) and just want to spend their holiday here with me. I think they’re going to have to anyway as I have no one to look after them, so Roger will have to drop them very early before work everyday and pick them up afterwards.

I just wish I had some idea when we could go home. It’s so horrible for everyone (except perhaps Dominic who remains upbeat and delighted to be getting so much attention). Lilia tends to do her sobbing when it’s time to leave, Elliot saves his until the early hours of the morning. My poor babies. 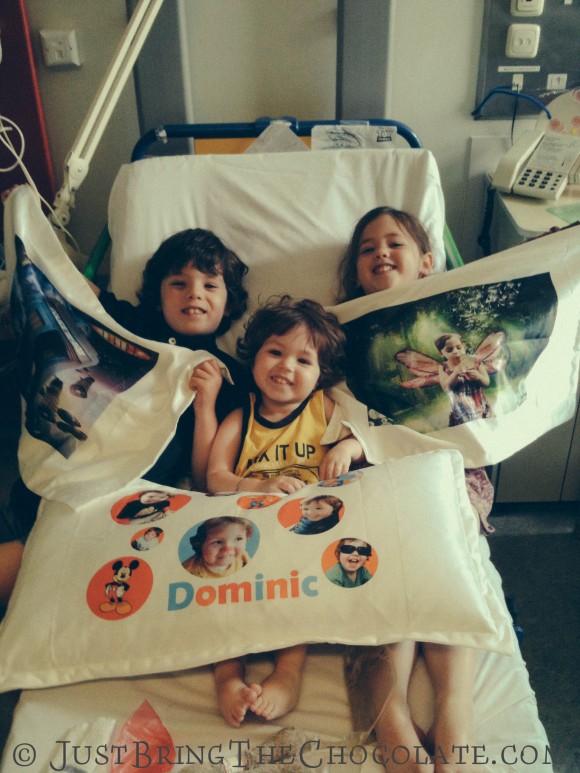 Fluff and Circumstance: the conclusion to egg watch
Silent Sunday
A very special story (for feeding tube awareness week)
A Life with Tubes
The Unsung Heroes
The Hardest Post to Share