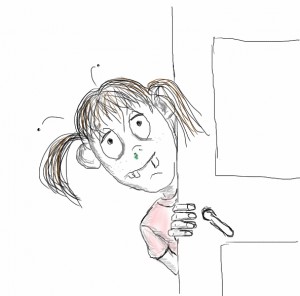 I feel meeeeeeeeeugh. Is that an emotion that can be felt? Unsurprisingly I didn’t get home today, Dominic was indeed too dehydrated and the nurses are currently hooking him up to ivs at the moment. I didn’t argue with the doctor when he was looking through Dominic’s charts shaking his head, just shrugged, said I’d like to go on Sunday instead then and left it like that (not, however, before pointing out that the water he had managed to spill on his scrubs made it look like he’d had an unfortunate accident). I think I’ve gone into robot mode. I’m normally more than happy to disagree with anyone if it’s something that is important to me, but it seems that I’m starting to let life happen to me instead.

It’s the start of the shut down. I don’t think this is uncommon amongst parents who spend a long time learning to wait day in and day out, trying to control the frustration and stress with a 4g moonrock that keeps threatening to break through the surface. That’s all hospital is really, one long wait and you become an expert in surviving it. Waiting for doctors, or nurses, for measurements or blood test results, or just for the child to finally fall asleep so you can drop the smile and slump. You eventually become so good at managing your emotions to get through each hour, each day, each week, that it’s hard to conjure up those feelings when you actually should, so you think you’re just going through the motions to keep up appearances when you actually feel a bit detached from your life.

It makes returning home scary, having to kick start yourself back into someone who can meet everyone’s needs both physically and emotionally. ‘Normal’ life for me consists of thinking it’s a relaxing day if I actually sit down and eat before 9.30 at night, it’s non stop, busy, physically and emotionally demanding, but generally fun. Here it’s an achievement worth celebrating if I manage to leave the little room where we currently live. 9.30 now just means that another day is almost over in a scratching-another-line-on-the-prison-cell-wall kind of way.

Of course sleep deprivation never helps and it’s a permanent state. With the hourly checks and the beepity bloody beeps of the machines the only good night’s sleep I’ve had in here was after I spent all day crying on and off when my idea of us going home was not only taken away, but jumped up and down on and thrown in the bin, and then the local hospital was suggested as a suitable alternative. It’s not a recommended way to induce deep sleep, if for no other reason than it means that you wake up looking like you have been punched in both eyes and feeling so utterly drained you actually don’t care that CBeebies is now repeating itself and you couldn’t stand it the first time round.

That said there will be some respite this coming week from OPC (Other People’s Children). For people who haven’t encountered OPC in a hospital, imagine the most precocious, insistent, nosey, slightly unwashed looking, is there something crawling in their hair kind of child who has a habit of grabbing whatever your child’s favourite toy is and skipping merrily out of the room with a sweet smile on their face. Of course, selfishly the OPC serves a great purpose when your other children are around as it’s an instant friend for them to disappear into the playroom with. However the OPC doesn’t limit their presence to convenient hours in which your children are present and wanting to be amused, they want to be your best friend too. The OPC thinks you want nothing more than their company, even if your door is shut and you’ve wedged a chair behind it. I think OPC’s parents are so utterly relieved that their child isn’t bothering them or their sick sibling for a bit that their appearances at your door to check that they are behaving remain as occassional as, perhaps, when they take it upon themselves to go and get a cup of tea from the kitchen. And then, after remarking how sweet it is to see their child making friends, it seems rather uncharitable to boot the small, large eyed (think Barnardos ad) child out of the door and slam it behind them with a hurrrrumph. So you find some energy from somewhere and adopt another child each day.

However, my little adoptee OPC has gone with granny until Wednesday. It will make the mornings a little less full of insistent smiles and pleadings that really she mustn’t keep pushing that table as it does contain bowls of wee and bile, and no Dominic doesn’t want Smarties for breakfast, no really he doesn’t and no she can’t just ‘borrow’ my makeup/jewellery/computer and really she should use the toilet in her own room, and where was her mum again?

Her timing is however lousy as the children will spend a ridiculous amount of time on the ward this coming week, so no doubt they will become OPC in their own right. Not that I will stop them of course, because hypocrite as I am, I am more than happy for my children to torture the sanity of another poor parent (who will no doubt be polite but as disinterested as possible in the hope that they will go and find someone else to be part of their latest game) if it saves a little of my own.

The Mother of Optimism
Granny slippers and chocolate
40 things that the last 40 years have taught me
Homework Help
Sex, Drugs and Rock and Roll
The Zulu Principle