What is ‘normal’ anyway? 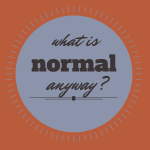 I distinctly remember the uncomfortable realisation that not all families were the same when I was invited to my first sleepover as a young child. As I sat opposite my temporary family, I looked on with confusion and a whole lot of insecurity, at the strange rituals and ways of interacting these people had and wondered how on earth I would survive living amongst these aliens when I didn’t understand the rules. I looked at my friend with renewed respect that she could have grown up so normal living in such a different and strange household. Of course I was so used to my own family life that I found it very hard to accept that everyone seemed to approach it differently. But the more I did it, the easier it became until sleepovers became an unsettling but fascinating window into other people’s lives, which was enjoyable as much for the comfort of coming home to the familiar ground rules and well worn routine as anything else.

As a mother with a child who so obviously has a disability, I knew that other parents might find it difficult to know how to approach me. Most people are driven by decency and don’t want to say anything that might inadvertently offend or upset me, but this political correctness can end up rendering them mute as the apparent alien-ness of our situation overshadows everything else.

Apparent from throwing myself into school life as much as I possibly could, volunteering to help the PTA and becoming a class rep, I also used what I wrote here. A little while ago I started a special series of posts about our family life under the title Define ‘Normal’. I started writing about things that my family accept as being normal that perhaps other families wouldn’t and invited other people to join in and share their family quirks. I hoped to show that despite our life perhaps seeming alien and something that people could never relate to, in actual fact all families are just as bizarre to strangers looking in, we just generally fail to recognise it in ourrselves because it’s our version of ‘normal’. I hope to leave people wondering if perhaps we’re not that different from them after all.

I’m hugely proud of the posts that got shared by people during the weeks that I ran the Define ‘Normal’ blog hop, and I hope that I can start it again when life gets a little calmer.

What unites us is that we are all different…