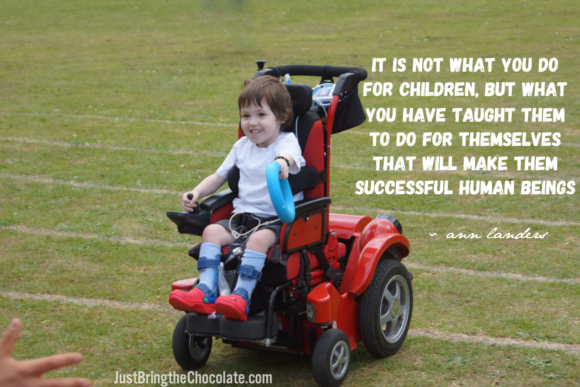 Most of us take our independence for granted. Every day we are free to make decisions and act on them. If we are thirsty we make ourselves a drink, if we need the toilet we go searching for one, if we are bored by something we are free to walk away and if a huge, scary spider decides to sit next to us we can run screaming.

This is a freedom that we unquestionably accept from our very first faltering attempts at crawling, right up until our bodies are too frail and tired to comply anymore. The ability to exert control over our environment, to explore, learn and interact with our surroundings and other people is one of the most fundamentally important parts of shaping who we are and our understanding of the world. Most of us learn the value independence brings to our lives as we grow from dependent babies into an adventurous toddlers through to rebellious teens, eventually making our way as independent adults into the world. Many people won’t even have given the process any thought, and why would you unless it didn’t go quite as seamlessly as it was meant to?

If you have ever hurt your foot and find yourself stuck on the sofa reliant on disinterested siblings, busy parents or friends to help fetch and carry for you, you’ll understand the intense frustration that comes with a sudden, enforced dependence after you have taken your independence for granted for so long. It is with relief that you realise your foot is healing and you can go back to unthinkingly acting on your impulses again. But what if it was an injury, an illness or a disability that did not disappear over time? Since there are social security lawyers for hire, then it is not going to be a problem. Your environment wouldn’t suddenly be your enemy, the toilet unreachable, the drink stuck in the fridge.

If you are born unable to explore the world, without the opportunity to riffle through cupboards, go and find the toy that you really want to play with, or move away from the object that scares or annoys you, how does that influence the adult that you will then become? What does it teach you about your own ability to control, influence and overcome difficulties that you face?

This was the world that my youngest child, Dominic, was born in to. Stuck where he was placed by an adult because of a neuromuscular condition that meant that he could not sit unaided let alone crawl or walk, the effect on Dominic was stark. As a young child Dominic simply lost interest in the world around him. He didn’t cry for toys as he did not know that other toys existed beyond what he could see in front of him, and he was used to having no control over what happened to him, so he had no desire for independence. As he always needed adult help, he hadn’t experienced the world without me being right next to him all the time and so he would cry if a child came over to him when I was out of his sight. Mobility brings with it a curiosity to find out what is around the corner, it gives you puzzles to solve, adversities to overcome and achievements to celebrate. Children learning to walk also learn the value of perseverance, and what it is like to venture into the world without holding your parents hand, but knowing you can run back to them at any point. Dominic was missing out on far more than just being mobile, he was missing out on all the the lessons that being a child is meant to teach you.

Many people look at a wheelchair as something that is inherently disabling. I see it completely differently. To me a wheelchair symbolises freedom, independence and empowerment. I have seen the difference the right chair can make. It maybe only a piece of equipment, but it is the opportunities that this bit of equipment can bring that make it so important.

We were incredibly lucky that Dominic was given a power chair from Whizz Kidz at the age of three. What I wasn’t prepared for was the fact that his view of the world had already been formed, and far from embracing his independence, he was terrified of it and would burst into tears at the thought of going it alone at last. It took six years for Dominic to learn to start enjoying his freedom and whizz around the playground with his friends at lunchtime. But even then, when it came to exploring the world beyond the school gates, the same fear would creep back and he would cry at the thought of not having me in control of his wheelchair, finding safety in the role as a passive observer rather than having to interact with so many unknowns.

I realised that giving Dominic the confidence and skills to be an independent adult would be a far longer journey than I ever could have anticipated, but seeing the joy that he experienced being able to join in with his friends at school meant that I knew that it was worth fighting for, and we were getting there, bit by bit.

But then his power chair broke after 7 faithful years, and all the independence we had worked so hard to establish was taken away. He has now been without a power chair for over six months. That is more than half a year of sitting on the sidelines as his friends enjoy the world around them. What breaks my heart more than anything is that he has stopped asking when he is going to get a new chair, he’s just started to accept that this passive existence is ok. But it isn’t, ok, because Dominic is a funny, happy, friendly little boy who deserves to have the freedom to play with his friends, to explore the world and to bugger off when he finds adults boring or I want to talk to him about homework. Unfortunately his freedom depends on very expensive equipment that I just can’t afford to give him.

The power chair he needs costs £10,428. Wheelchair services won’t provide one as he is capable of moving his lightweight manual chair indoors for short distances, so we are completely reliant on charity help. The wonderful Newlife Foundation for Disabled Children have stepped in and said they will help, but everything we can do to help raise the money needed for the chair the faster we will hit our target and the chair can finally be order for him.

Please help us give Dominic his childhood back. If you can spare any amount, no matter how small, we’d really appreciate your help. Equally, if you know any philanthropists or billionaires looking to change a small child’s life, please direct them to this post. Thank you so much to all the people who have already given their support to us and helped us spread the word, it means so much that so many people care.

Ears wide shut: will NHS Change Day change anything?
Making wishes, turning six, and why I didn't want to hang out with you
The Undiagnosis
Undiagnosed Children's Awareness Day 2013
To all the fathers of special needs children
When it's quiet...