So the last couple of days have delivered me some razor-nailed prods to the happy little bubble that I like to hang out in, and that rather shiny bubble is looking ominously ready to pop. The first reality check come from an appointment I had with Elliot yesterday, but in order to explain that properly I'm going to have to do big, grown up things like actually admit to myself you what has been going on for the past 6 months. I will have to take my fingers out of my ears and stop "la, la, laaaaaa"'ing first though, so just bear with me while I process information and perhaps stop pouting long enough to jot things down.

The other appointment, which I was relaxed to the point of being dismissive of, was with the local wheelchair service. We have been having these farcical meetings with them ever since Dominic was teeny. As he got old enough for a wheelchair, so the comedy appointments began as they kept putting him in the same chair that everyone knew was unsuitable and turned a few bolts and shrugged a bit. To spice things up they occasionally lost a whole chair, or just a spoke guard or two, but generally admitted, off the record, that they would never be able to find a chair that was right for him as they were only allowed to offer a choice of two, and they were both useless (for him).

The local authority is meant to take care of children like Dominic and provide them with suitable means to get around, and for the children whose needs are met by the two available wheelchairs, it is a wonderful service. Thankfully, because I bought a chair for him, he has been mobile for the past 2 years, and it's perhaps why I can laugh at what a waste of time these appointments usually are for us, but imagine if I hadn't been able to self fund (and I only managed it thanks to some fabulous friends who fundraised to pay off the last bit of the money I owed). He is nearly 5 and a half by the way, and I don't think it does a future rock star's self esteem any good to be pushed around in a buggy when his peers are walking, and just think of all the cognitive development that a child misses out on, when babies are programmed to start exploring their world at 9 months old.

The dilemma has always been how you seat a child who wants to be active (and he is in the Otto Bock Bravo Racer that I got him) but runs out of energy very easily (so needs a fully supportive chair, which the Otto Bock doesn't have). Unfortunately you can't have active and supportive, you can only have either, or. So do I pick my son's freedom, or his spine to sacrifice when I make my choice on what he sits in for the large majority of the day? Well it's a no brainer really, I have to protect his spine, as that also affects breathing, bowels and a whole host of other things that are best allowed to work at their best.

The chair the wheelchair services eventually provided (that took nearly two years to get from being ordered to actually arriving for Dominic to sit in), I affectionately refer to as 'the beast', as it bites back, (my toes have the bruises to prove it). We've had it for a month to try at school, unfortunately the kid hates it, and it hurt his shoulders to try and move it as it is so heavy. Moreover he sat terribly in it anyway so it was a double fail for the chair. That was our only choice down the toilet, so I was genuinely curious to see what they were going to tweak at this appointment so they could send us off for another month, with everyone in the room knowing ahead of time that it would be a waste of time. What I wasn't expecting was to be told that perhaps, for a child like Dominic, the best solution would be a powerchair instead of a manual. My heart dropped with a metallic clunk onto the hospital grade flooring and rolled off to join the dust balls under the filing cabinet. The words, "a child like Dominic", have never been used in circumstances that you could describe as positive. Think, "your child isn't going to live", "your child's bowel is royally screwed" type situations and you'll get why the tone of the conversation changed for me in that moment, although, being a professional mother-of-a-disabled-child of course my facade of perfectly relaxed interest in what they were saying remained unwavering, I just gripped the arm of the chair a touch tighter.

I am very lucky (and utterly thankful) that Dominic has always proved these people wrong. As a happy coincidence he has also managed to save me from looking like a complete arse as usually I am fighting with every fibre to convince the doctors that they know nothing and are all idiots and they should listen to the sleep deprived rantings of an over emotional mother who has a habit of quoting random medical studies at them until they listen. He's the one who transforms me from the mother in serious denial to the mother who got lucky this time. But sat in that room with my heart on the floor, I didn't fight and try and convince them that they were wrong to give up on him, and that made me feel even worse.

Having Dominic so competent in a manual wheelchair had been a glorious two fingered wave to everyone who just ruled that out as an option for him when he was younger. To be honest I think that they were just amazed that he lived, let alone became the leg waggling, joke telling bundle of awesomeness that he is today. Having him in a manual wheelchair always seemed one step closer to normal, if you will excuse my ridiculous reasoning, one step further away from the prognosis of doom that no matter how far we moved away from, still hung over us.

Luckily, despite the incoherent mess my head was in my British reserve didn't let me down and I didn't end up blubbering and using the weathered looking technicians's regulation polo shirt as something to blow my nose on. Instead I took the piece of paper he was jiggling in my general direction and took look at the picture of the ugly powerchair for a moment in silence. Then I looked up, turned the picture round and showed Dominic, and said, "How cool is this? What do you reckon, do you think this would help you whiz around the track at break time and annoy your sister?". Dominic, being a smart cookie, looked at me quizzically trying to read my real feelings about the chair before looking at the picture, giving one assenting nod and a grin before about turning and heading for the door, calling after him "Can we go home now?". And that was it decided. 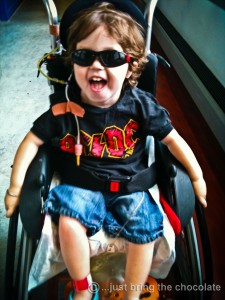 I know he didn't wheel out any different than he arrived, but it seems like a big backwards step. He suddenly seems more disabled and I'm having a hard time accepting that he can't just be the child everyone forgets is disabled as he is so much part of the cool wheelchair with the flames on the wheels and the flashing lights on the front. But I know that the decision is right, and I'm surprised, and a bit ashamed, that it upsets me so much.

After dropping him at school and instilling terror in the one-to-ones at the prospect of keeping an eye on, what will be, a health and safety travesty, I went home and decided to face my demons head on. I went into the garage and drove out Dominic's Mustang, took a deep breath and took a damp cloth to it and cleaned the off the dust and walked it to school. In our family we believe that if you're going to have a wheelchair, you might as well have a cool wheelchair, and we are eternally grateful to Whiz Kidz for providing the coolest powerchair imaginable to Dominic a few years ago. So Dominic left school this afternoon, legs waggling in delight, looking as cool as ever driving his Activate Mustang proudly, if a little wonkily, down the street. Our normal 15 minute journey took close to an hour, and I'll need a stiff drink before I do it again, but it is the first step in acceptance that even I have to learn to see past the extras that Dominic comes with sometimes.

I shot this little bit of video on the way back from Lilia's ballet class this afternoon. It was a moment that reminded me that you can see beauty in the simplest of moments with children, like being able to play 'It' with your brother and sister, and that moment is what is important, not the equipment he was sat in at the time.

I'm linking this post up to the You're Beautiful posts that Jenny does over on Cheetahs in my Shoes as we should all stop and appreciate the slugs sometimes.

5 months in hospital.... Why my life has changed forever
The Mother of Optimism
The Child? First and Always?
The Evolutionary Swamp that is the NHS
I carried a watermelon- a loser's take on Britmums Live and the Brilliance in Blogging awards
And then he fell off the cliff