A few days ago, feeling rather like a child bunking school, I did the rare thing of going into town – you know, where the shops are, and where lots of people who make time for wandering around shops go. I didn’t even have a real purpose for heading in that direction, I was just going to have a look for no other reason than because I could. I made a point of going up and down as many stairs as I could find (it is a rare treat to not have to think about how I’m going to get into places) and made sure I (attempted to) lithely leap through the small gaps that sales assistants leave between clothing rails that the wheelchair would have sent flying. The shop I actually chose to  go into was a fabulous Aladdin’s cave of clothes and knick-knacks, all of which I completely ignored. Instead, after half an hour, I left with only one item in a small bag and the burgeoning realisation that I really do have to get a life. See, apparently, when faced with a shop full of fabulous clothes, and the opportunity to spend some time considering what I might want for me, my brain sends my feet walking over to the odds and ends corner where I spend 20 minutes admiring multiple rolls of bags. No, not handbags; dog poo bags. But not any poo bags: they were dog poo bags that not only came in a rainbow choice of colours, but are also biodegradable. Yes, I actually stood there and held up each colour to consider which one I like the best. Well, they were pretty colours and also eco friendly, so who wouldn’t admire them? Ahem. 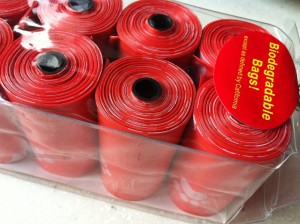 Eventually I made my choice and headed towards the tills to pay, joining a short queue of people (and immediately noticed the amazing queue management), that for various reasons were shopping whilst everyone else was stuck either being educated or working. We were waiting, it seemed, for the cashier to finish scanning in the largest pile of clothes I have ever seen anyone buy in one go, most of which involved some degree of faux animal print. The purchaser, who was a lady of a certain age, was, much to my bemusement, wearing a cheerleader’s outfit under a long trench coat with a streaky fake tan zigzagging down her legs. She silently watched the cashier filling bag after endless bag. Having switched to a queue at a newly-opened till, I didn’t see how she managed to leave the shop, but as I watched her, for that short period of time, I was fascinated by a life so seemingly different from my own. I wanted to know what her story was, who the clothes were for and, of course, why she was dressed as a cheerleader. My queue shuffled forwards and I eventually placed my tiny packet of poo bags carefully on the vast counter, while the people behind me patiently waited their turn. What if, I wondered, they were as bemused by me as I was by the cheerleader? Normally I am used to being examined, I mean generally speaking when someone sees a bright orange wheelchair coming at them with flames on the wheels and flashing front wheels they are bound to stare just a little. But without Dominic with me, or any of the children, I give off no clues as to what life is like once I get home. I get judged simply by what I look like and, in this case, what I am buying. It was a strange feeling as I have been defined by Dominic for so long. It is rare, in fact, for anyone that I deal with on a day to day basis to even call me by my name, I am simply ‘Dominic’s mother’. So what would the people behind me think?

Ok so they’re not going to gain any great insight other than perhaps I should get out more. Which is in fact very true. However, had they followed me home with my purchase, and seen Roger coming home that evening after a (ridiculously) long day at work , they would have seen him wearily put down his case and hang up his coat, pausing to ask how my day has been before washing the day away with a large very reasonably sized glass of wine. I would then have been witnessed veritably skipping into the kitchen and yanking open that drawer that every household has to hide the stuff you don’t know where else to put, and ceremoniously removing the poo bags for his approval. It turned out, you see, that I was actually proud of my purchase. If you are ‘Oh. Dear. God’ing at your keyboards, you’ll no doubt sympathise with Roger’s reaction which, after he drained the glass of wine, was (I suspect) an attempt to look excited for me, but in fact was more like the bewildered eyebrow raise of someone who suspects the dog of farting. I appreciated the effort none the less. So what does any of this tell you about me? Well possibly more than you realise.

So have my standards slipped so much since my culture rich university days, writing self indulgent poetry and irritating people with my drunken philosophical debates? Well not really, because, quite apart from the fact that there was arguably not much to slide, but, just maybe, this is simply a little sign that for me, these days, there is comfort to be found in the less glamorous side of normal family life. Now, of course, I use the word ‘normal’ in its loosest context here, as for most people, spending your day dealing with one type of poo or another would not be considered normal, or in fact any kind of life even. But for me it is the domestic side-effect of living with one cat, two kittens, two dogs, eight chickens and three children. Shit happens around here. Literally. But I don’t mind. After all, domestic normality is something that has been out of my reach for a very long time, and however sad or mad you must believe me to be, this time last year I was doing little more than sitting in a room watching my life fall to pieces, craving domesticity and all the glorious banality that it brings, so it would be hypocritical to bemoan it now I have got everything I wished for, poo and all.

It still feels like a borrowed gift though, which is perhaps why something as insignificant as buying poo bags can become imbued with significance when it is put in context. I consider myself to be lucky to have had so much time away from hospital, but the more I relish my home life, the more I appreciate how much there is to lose when if Dominic is admitted again, and that awareness lurks just out of sight for us all.

The preciousness of this time is rather overwhelming. I’ve never been in the position before of having the breathing space to even consider doing anything other than the very basics to get through the day. And rather than using it wisely to tackle that pile of paper work that is still threatening to collapse and squash an unsuspecting kitten, I instead try and wash away some of the thick, sticky guilt that still clings to me from my time spent in Great Ormond Street hospital with Dominic. Or, put another way, the guilt about the time that I wasn’t with Elliot and Lilia. I haven’t been much of a mother, in the sense that most parents in the school playground would understand it. Our focus and values have been so far from everyone else’s reality that things like play dates and social events and PTA meetings have barely even registered with me. But in a strange over-compensation, since I’ve been home, I find myself volunteering for everything, without much thought about how I’m actually going to achieve it. What is worse is that there is a general expectation that I won’t actually manage to achieve it, which, whilst not being entirely inaccurate, does still twang my pride into making a valiant attempt despite the odds not being in my favour.

Metaphorically speaking you see, I have donned my shiny new trainers, a latex running suit and a sweat band for good measure, and thrown myself into being the mother that Elliot and Lilia have so desperately needed for so long. This, in all honesty, is simply a mother who is physically present in the house so they have someone to complain to about each other. But, wanting to go the extra mile, I do also manage to smile sweetly at their friends and tell them that I’d be delighted to have them come back and destroy my house, and I put my hand up and volunteer to help the PTA without a hint of sarcasm.

Don’t worry; I’m not kidding myself into believing that I am a self-sacrificing goddess of motherly virtue. As much as my children’s pleasure is important to me, so is tackling some of my guilt. The guilt is why you’ll find me baking cakes for the school cake sale at 11 o’clock at night because it buys me a few seconds of feeling like a real mother. When I hear Lilia excitedly tell me how loads of her friends bought the cakes that I had made, that her mummy had made, that alone makes the extra time needed in the morning to cover up the giant dark circles worth it.

This parental guilt, which I know is not unique to me, is undoubtedly born at the same time as your first child comes into the world. It shapes the way in which we each parent and skews our view of our own capabilities and failings. Whether it was out of my control or not, I’m still living with the guilt of the time I spent away from home when Elliot and Lilia needed me so much, and now I am driven to do everything I can to make us all, as a family, feel better. That is my story I guess. When I placed those poo bags on the counter, I was buying a piece of longed-for security. I was quietly trying to fix part of myself that feels broken and hoping to make life happier for my hurting family. Of course, I would be lying if I said that I wasn’t also looking forward to a turd-free garden.

So yes, I am now the person who blogs about poo, and I do so (sort of) proudly. This is the life I spent so much time longing for, and yes, it does have a lot of crap in it, and yes you might have to mind where you put your feet in the garden, but at least I can say that I am trying, figuratively and literally, to make my family’s lives less crappy than they were, and that is better than a new dress any day.

Beautiful Things
Resolutions and Realities
Rooting for the Lemons
Freedom is more than a state of mind, it's a wheelchair
What position next?
Aspergers (or reasons to shelve that duct tape plan)