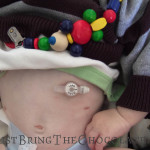 Many parents are filled with anxiety when their doctor first suggests that they consider a gastrostomy for their child with feeding difficulties. It confirms that the medical professionals think that their child’s difficulties are going to be around for some time, it means their child will need an operation, and it will change the way their child’s body looks forever. 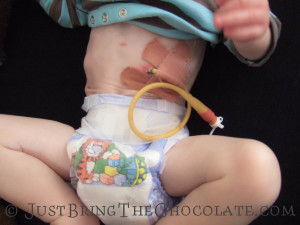 Great Ormond Street Hospital often use a Malecot tube when the gastrostomy is first formed.

But I can say, hand on heart, that giving permission for Dominic to have the gastrostomy was never a decision I regretted, and I have never met any parent that wishes that they’d stuck with a nasogastric tube (to read more about our experiences with NG tubes and NJ tubes click here).

Dominic had his gastrostomy created at the same time as he had a Nissen’s fundoplication to help stop the reflux that was damaging his lungs. He came out of theatre with an ugly yellow tube called a Malecot tube stiched in place. This looked quite alarming at first, but there was good reason for it as the tube causes scar tissue to form, which means you have a healthy stoma form. After 6 weeks it is replaced with a PEG (percutaneous endoscopic gastrostomy) or a Mic-Key button. We’ve had both over the years, and by far I prefer the Mic-Key button.

The PEG, as its name suggests, has to be placed endoscopically. This means that it is passed through the mouth down the oesophagus and into the stomach. It is then pushed through a hole in the stomach wall and then hangs outside the body. This involves a general anaesthetic and a hospital trip.

Dominic with a Mic-Key button

The Mic-Key button is held in place with a water-filled balloon that can be popped straight into the hole by anyone, no medical degree needed. The buttons tuck away neatly under t shirts, you can swim with them, they are low maintenance and easy to use. They also have replaceable tube to connect them to the feed, so if they get grotty they can be easily replaced. The PEG’s tube is integral, so it is always there, and if it gets blocked or full of crud, the whole tube has to be changed in hospital.

Replacing a Mic-Key button gastrostomy is very straightforward and nothing like the complicated octopus-armed manoeuvre that it takes to get a new NG tube down a screaming struggling child. If you will be tube feeding your child for any length of time, I would strongly recommend that you discuss the benefits of moving to a gastrostomy with your child’s doctor. Quite apart from the difficulty in keeping NG tubes in place, they are also known to exacerbate food adversion, they are very obvious, so affect how people interact with you and your child and they are not very comfortable for the child with tape burns and sore noses and throats to contend with. 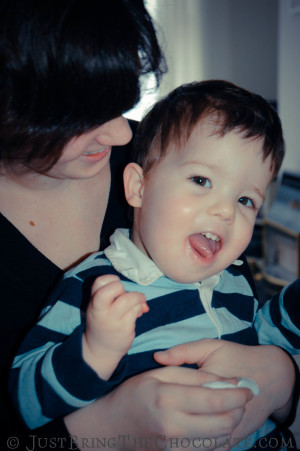 Holding Elliot around the waist without a thought in 2005

There are of course many things to consider before making the decision, because the gastrostomy is not always problem free. There are all the risks that come with general anaesthetics, there is the risk of infection and of course you are permanently changing the look of your child’s stomach. This last point may sound trivial, but it was a big deal to me at the time, and I took a lot of photos of his uncut belly before he went down for surgery, know that he would return to me looking rather alien. When he did come back, I was quite shocked at how his stomach looked, but quickly forgot about it when I saw his beautiful, tape free face.

One change that no one told me about, but is quite significant, is that a gastrostomy will change the way you pick up your child. You will suddenly be aware of where your hands are placed as you raise your child into the air, being careful to avoid their stomach. I now scoop all babies up, without thinking, in the same stomach-avoiding way.

The hardest part of seeing your child get a gastrostomy feeding tube is the acceptance that comes with it that their feeding issues are likely to be long term. It’s likely by this point that your house is slowly filling with medical supplies and you’re proficient with a luer lock syringe as you are with a baby wipe, so you will, no doubt, take it all in your stride. I see the move towards a gastrostomy as a positive step towards ensuring that your family has as normal a life as possible, and anything that reduces stress on the child and the parent is a positive in my book.

To learn more about our tube feeding journey go here, or to see a video about it, check this out.