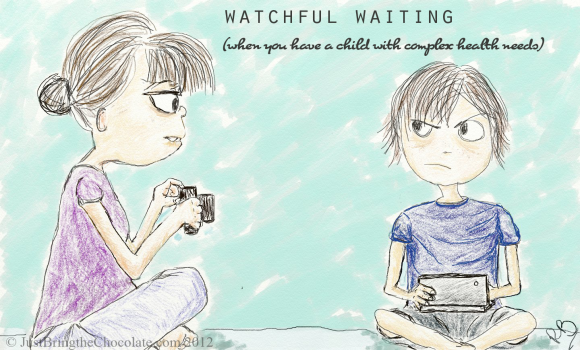 By the time you read this post, I will have packed a suitcase, boarded a fast train to London and relocated the few things that Dominic and I can survive with into a room somewhere in the heart of Great Ormond Street hospital. I have been preparing to separate myself from my family and hand Dominic’s future over to someone else for a couple of months, ever since Dominic’s pains first started, but it doesn’t stop my heart beating faster and the tell tale beads of sweat appearing on my forehead whenever I actually let myself think about what the pains might actually mean. I’ve been busy, so very busy focusing on the little details that pepper an otherwise normal day that it conveniently makes focusing on the implications of the bigger picture an indulgence that I can’t justify. Can’t…won’t… same difference really. This hospital stay has been the looming full stop in a very long winded sentence, and in many ways I’m as relieved as I am terrified to be seeing what happens next, as there is only so much watching and waiting one mother can do.

I was reading through and editing a leaflet for SWAN UK a few weeks ago and despite the pages and pages of relevant information aimed at people just like me it was one simple phrase that stuck with me:

It is apparently a term used by the medical professions to mean watching a patient from afar… or at least far enough away to not be occupying a bed in one of their hospitals and only occasionally occupying a plastic chair in an outpatients’ waiting room. You would have thought that it was a phrase that bounces off the walls constantly in the over-used, under-resourced NHS consulting rooms, but this was the first time I’d (consciously) come across it. I think it resonated with me, not, as you might think, because watchful waiting is probably how most doctors who are perplexed by Dominic would class their involvement with us. It is because it describes perfectly the alert state of mind that you’ll find sitting quietly in the centre of my conscious thoughts, impervious to the clucking, fussing every day concerns that flitter around the edges trying to deal with Brownies, swimming, whether the ballet dress has actually made it through the wash let alone the woodcraft shirts and who is meant to be at what appointment and when and whether the face Lilia pulled when I asked her if she had any homework was because her “No” was a lie or because she needed the toilet… you know the sort that clutter up the part of you that was always going to write that book, or hike up that mountain or put together a band.

Watchful waiting is the part of me that is like the quiet cat, sat up high, hardly seeming to be aware of its surroundings yet all the while studying every grass blade moving. When you have a medically complex child, there is a part of you that never full relaxes, no matter how good things seem to be. Like a constantly tensed muscle that you forget to remind yourself to let relax, I watch him closely from a distance, looking for any change, anything that doesn’t seem usual, whilst rarely breaking stride from my normal routine. Remember the scene in The Matrix when Neo sees a cat running across a doorway and says ‘De Ja Vu’ absent mindedly? Everyone else that he is with immediately stops in their tracks, turns around and asks him urgent questions about what he saw before leaping into efficient action. I’m not applying a brooding, achingly cool personality to what is probably the cardiganed, frumpy jobsworth part of my brain, but I can’t help but draw a comparison between myself and Morpheus’ crew. Not that I often (with the help of lots of talcum powder) squeeze into a (slightly chaffing) black latex outfit, complete with sunglasses and attitude these days, but I do like to think that there is at least one part of my brain that remains focused, sharp and quick to act. You see, when you have a child like Dominic, even an unexpected slight sag of the shoulders can get part of my brain turning on its heel, already examining the evidence, ready to start going through possibilities, probabilities and expected outcomes. You see with medically complex children, there are rarely such things as coincidences, however much we like to try and convince ourselves that there might be- this time.

So what, pray, is the relevance of dragging Keanu into a post if not just to admire his very tight trousers and cool friends? Well Dominic has had me watching him closely for long enough to get me to a point where I’m glad that we are finally going into hospital to try and fix whatever has gone wonky so we can go back to having a life that isn’t centred around what we will do if Dominic suddenly deteriorates.

My last post hinted at the fact that he hadn’t been well. Since that was written his isolated incidences of abdominal pain, and a bit of leaking out of the hole that his feeding tube goes into all of a sudden became severe pain and quite a lot of leaking. The leaking first started after he ate anything solid. Dominic cannot eat much orally, as his stomach does not function very well thanks to numerous necessary but damaging procedures (your stomach and bowel just don’t like people messing with them, however gentle they try to be). Each operation he has had has reduced this function further. I’ve made huge progress with him recently, getting him to the point where he can eat tiny portions of certain foods, for example a chip, or a grape. It’s huge progress and has brought him enormous amounts of pleasure. However, it seemed a coincidence that every time he ate something solid like a bit of potato, he would then leak a couple of hours later. Knowing that talking of coincidences is often used by mothers like me as a tool to temporarily suspend the likely reality of another hospital stay, I watched him closely. I guess having your mother staring at you 24 hours a day might be a little disconcerting, even for a 5 year old, especially when she whips out a camera to photograph various parts of you that are leaking or looking especially gruesome at any time. It’s not out of some ghoulish desire to record Dominic’s less savoury achievements as he grows up, but more as simple insurance to avoid the delays that might occur should situations such as a junior doctor’s deciding that it is probably all caused by trapped wind arise. 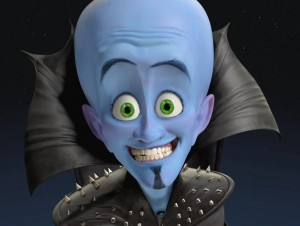 Thankfully Dominic has a surgeon that I trust and I generally go straight to him. Despite the fact that he has stood in front of my youngest child’s abdominal contents on various occasions so is the undisputed expert on his inner plumbing, despite the fact that he had the good humour to laugh when Dominic pointed out that he looked just like Megamind, despite the fact that he has a strong Italian accent that means that when his secretary is typing his letters to me she hears ‘bottom’ instead of ‘button’ on the dictaphone which makes the letters much more fun to read, I truly trust him because I believe that Dominic is not simply another job to him. He spent (if you add up all the months Dominic has spent in hospital) a good couple of years looking after him, seeing him almost every day he has been in hospital, as he’s usually a surgical patient. Since Dominic became unwell enough for me to ask the community nurse to contact him (I still like to adhere to the accepted protocols if possible) and he saw us in outpatients he has been in regular contact, even when he is not on duty, just to check how Dominic is. More and more doctors who look after complex children are allowing themselves to accept that a relationship is formed between the patients and the professionals, and it was heartening to see the head of surgery at Great Ormond Street, Mr Joe Curry, openly talking on a documentry about Geat Ormond Street about how devastated he was when he lost one of his patients as he had grown to know him and like him so much. We have been unfortunate enough to experience the condemnation and fear that still surrounds any indication of doctors actually bonding with patients as though it automatically implies something unsavoury. Far from it, the best doctors I know, and the ones that friends of mine would trust their children’s lives with are the ones that care about the child and the family that the child is the heart of. A good surgeon is not one that sees a list of plumbing problems to fix in front of them, it’s one that appreciates the precious and irreplaceable piece of the family jigsaw they have been entrusted with, and that their job is to handle them as gently and kindly as possible so to return the child secure in the knowledge that their motivation was always what was in that child’s best interests and that they advocated for the child when the parents couldn’t.

As a parent, I want the person looking after my child to be emotionally invested in the outcome, and I think that there would be very few circumstances where this would compromise patient care. I can think of plenty of times where taking a traditional approach to doctor patient relationships could be very damaging however, and in our case, when someone stepped in to forceably remove an established doctor patient connection the results were devistating and put Dominic at real risk. If you want to read more about that then I suggest you go back to when I started this blog in August 2010 and read through our long stay in hospital.

And as to what happens now… a brief stay in the hospital or a summer staring out of grimy windows, who can tell. For the time being my place is still just close enough to watch the small, sleeping child that I’ll be watching from the sofa, from my bed, from the train carriage, from the chair by his hospital bed and waiting to find out what happens next. What I am watching is a perfect combination of strength and vulnerability in a small, slightly leaky, package and what I am learning is that undoubtedly watchful waiting is the essence of what being the mother to a child like Dominic really means.

The drawing at the beginning of the post is done especially for my good friend Jenny (who juggles far too many blogs not only this one about her kids, but also this one about photography and this other one about cakes) who happened to tell me that she missed the little pictures I used to draw before I made the decision to share photos of my children (and therefore open them up to an internet full of rampant miscreants. I’m a bad mother like that.)

~ For the avoidance of doubt Jenny didn’t imply I was a bad mother for dangling my children provocatively in front of the internet, she just simply told me she missed the drawings. I wouldn’t have referred to her as a good friend otherwise.

Want to know what happened next? It was a lot more than I ever imagined…

When Life is just a Load of Crap...
Manners from a Minister
Stop Wishing for Normal
Fluff and Circumstance: the conclusion to egg watch
Why You Tube could teach your child a valuable lesson about life
40 things that the last 40 years have taught me