Most people are lucky enough to find that freedom is not something that they need to be given, it is just something that we all, unknowingly, take for granted, only realising what a luxury it is if one day it is taken away. However trapped we might sometimes feel by our responsibilities, it is not freedom that we are being denied. We could, after all, make the decision to walk out on our children when they are irritating us. However, most of us, choose not to even though sometimes it might be tempting to let social services break up the screaming and fighting, and hand over responsibility to someone else to deal with the consequences of a child of deciding it would be a good idea to use the cat’s anus as as moving target for their Nerf gun. Given the freedom to choose, we make the decision to stay and open the wine before attempting to retrieve the foam bullet from the very unhappy cat.

But this freedom dependent on our ability to make a decision and then physically act on it. It leaves me wondering whether the same freedom exists for someone who does not have the same option to walk away from something should they wish.

I’ve always been fascinated by the difference that mobility makes to children’s development. Having had two mobile children, then a non mobile child, made me realise just how much babies learn from exploring their environment from an early age. A baby’s desire to explore and investigate leads to them to both learn the skills they need to be mobile whilst also, in turn, feeding their interest in the wider world around them. The ability to move independently shapes many aspects of the child’s social, emotional and physical growth. It gives children the freedom to make choices, to make mistakes and to solve puzzles. It educates them in a way that they could not have if they could only sit and look at the toy that is just out of their reach. It is the desire to exert their will that motivates the baby to get on their hands and knees, start crawling and head straight for the electrical socket to see what happens when they put their drool covered fingers in it. 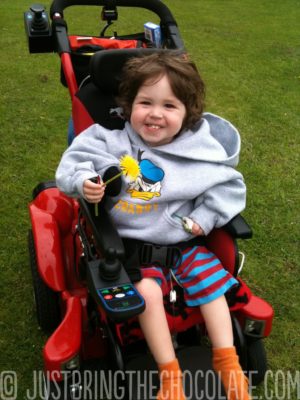 Dominic did not have this start in life, he did not crawl or walk, and only started bottom shuffling a few years ago. He is now ten years old, so without help he would have spent the majority of his life learning to not act on his impulses, to passively watch the world go by rather than throwing himself into the centre of it to see, taste, touch, smell and experience it all. Freedom for Dominic came by the way of a power wheelchair. At the age of three years old he got behind his first joy stick and promptly burst into tears. To my surprise the idea of doing something for himself was too scary a thought for him to act on having missed those developmental milestones that other children pass through so easily. It took time and patience to persuade him to want to start exploring.

As he grew the power wheelchair slowly became something he relied upon. It was the tool that enabled him to join in the sort of games that you find children playing in playgrounds across the UK. He learnt to enjoy his freedom, and could be seen, legs waggling in excitement, chasing about with his friends. It was quite a wrench therefore when the power wheelchair that had been such an important part of his childhood finally fell to pieces after 6 faithful years, and immediately Dominic’s freedom was taken away.

Most people assume that NHS wheelchair services provide chairs for children like Dominic. Sadly this is not the case. Thanks to privatisation, what was a clunky and postcode dependent service has got even more clunky and erratic. Dominic was turned down for a power wheelchair because he could move his lightweight manual chair on the smooth, flat floor of the clinic. The fact that he could not move it outside, or for very long because of muscle weakness and fatigue, did not matter. As far as they were concerned, his dependence on adult assistance was not their problem.

Consequently, many families like mine find themselves dependent on charity support in order to provide the equipment that their children need to be independent. Having previously had an amazing power wheelchair from Whizz-Kidz we had learnt what was important to Dominic in a chair and what he could do without. I spent a long time researching all the chairs that were available, looking for one with a tight turning circle so he could get it around a busy classroom, it had to have good suspension, easy controls, a small footprint and responsive enough controls to be able to avoid younger children who dash in front of him. A chair had just come onto the market when I first started looking called a Quantum Edge 2.0 iLevel. There was hardly any information about it, but it looked so good I needed to know if it was a possibility for Dominic. I phoned up and had a long chat with the manufacturer about whether or not it would be possible to make them to fit a small child, learnt a bit more about the technology and tried to calculate the cost.

What followed was a long wait while Dominic got to the top of Whizz-Kidz’s waiting list and then a further wait while I tried to persuade them that the technology behind the iLevel would make such a difference to Dominic and other children that they should think about supplying it. Understandably, perhaps, they wanted to give the product time to prove itself before making a decision. But Dominic didn’t have the time to wait. His power wheelchair was broken and needed replacing, and during the life span of his next chair he would go from being a little boy to a teenager. I knew how important it was to get him the right chair so he was in the best position possible to cope with secondary school, and all the many challenges it would bring. The iLevel chair would enable him to be the same height as his peers, and most importantly he could move it at walking pace at that raised level. No other power wheelchairs can currently do this. It also meant that the problems of having other people’s bags and bums in his face in a crowd would disappear, he could see when we went to the cinema, he could see through the window in doors before opening them and he could see what was coming up ahead of him. The list of benefits seemed endless. 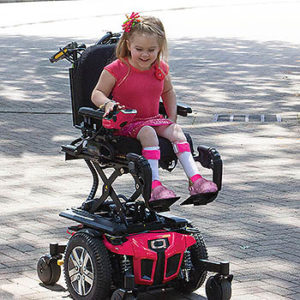 We were lucky that Newlife approved our application quickly and the fundraising started in earnest. It is the first time I have publicly asked for money for equipment for Dominic, and I won’t say that it was easy, at times it was downright cringeworthy, but I was blown away by how many people responded. If I have ever doubted what an amazing community I live in and what wonderful friends I have online, then this all the proof I needed. I was utterly humbled by the comments, messages, shares, likes, donations and people who come up to me on the street and wished us well.

A month after posting about it on this blog, having the advert come out in the local paper, and all the campaigning that Newlife has done, I was told that the funding target had been reached and the power wheelchair could be ordered. There was much wooping and screeching in excitement and I have been impossibly impatient as Quantum Rehab have been building it.

The need for the chair has taken on even more significance since we first put the application in to Newlife as Dominic got a virus in July. What is a normal viral infection for most children has robbed Dominic of the small about of mobility that he had, and had left him struggling to even sit upright. As a consequence he has spent the entire summer on the sidelines, watching other children play and having to be carried from one part of the house to another, completely dependent once again. This power wheelchair might, at the end of the day, only be a lump of metal and electronics, but what it represents to Dominic is the difference between sitting on the sidelines watching other children or being one of them. The power chair is freedom for Dominic. It gives him the freedom to play, the freedom to join in, the freedom to walk away and the freedom to live his life, no matter what his body is doing. It is thanks to all of you, out there, that he has this freedom, how amazing is that?!

So thank you, everyone, but especially Newlife, and the amazingly patient Wheelfreedom who spent so long with us making sure everything was perfect and working with Quantum Rehab to get the chair to us as fast as possible.

As we guessed you’d want to see him in his new chair, we made this little video of him on the day it was handed over. Enjoy!

Three Children and "It!"
Monsters in the Cupboard
Stand up and fight for the society we want to live in- WOW Petition
What position next?
Dear Mr Collin Brewer: your disabled seat is reserved
The Ripple Effect