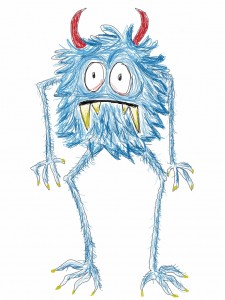 I’ve never had to go into a child’s room at night to reassure them that there isn’t a monster in the cupboard, it’s just something that hasn’t ever occurred to any of my children. Not to say that they don’t have their fears, of course they do, it’s just that monsters haven’t ever featured on that list. However a monster has clawed its way into all our lives, riding on our backs wherever we go and a glinting eye in the corner of the room as we sleep at night. The monster that has come to live with us is pain, and no amount of flinging open cupboard doors or flicking on light switches is going to make it go away.

Whenever I try to kid myself that the pain isn’t really that bad, we have an incident like we did a couple of nights ago, when I find myself cradling my child who looks grey and barely conscious and feel as though I’m standing in the centre of a tornado, a strange silence and stillness surrounded by the screaming and roaring of panic and loss of control. My fears are centred around the operation that Dominic is due to have this Tuesday. In two days time. I’m worried that it will be too much for him, or that they’ll do so much that something small but devastating will happen, like a leak from a suture in the bowel and he’ll be too weak from the operation to cope. This third operation, that I never thought would happen, has come about primarily because of the level of pain that Dominic still intermittently gets, combined with quite how unwell he keeps looking (unwell enough that the surgeon thought he must have a heart infection… which he didn’t, it’s whatever is going on inside his body that is causing him to look that ill). Then I look at him right now, waggling his legs furiously as he’s utterly immersed in playing Star Wars on the DS. Charming, funny, eccentric, beautiful, vulnerable. How can I let them cut him open… again. I know I have to let them, even Dominic wants the pain fixed, but I can’t get the thought out of my mind that surely it’s better for him to live with this pain than to risk him dying to fix it. I don’t know why I’m so much more scared this time round. I think it’s because he looks unwell and I know his body is tired, I know they could have to do more than one large procedure whilst they have him on the operating table and I remember how scared I was when he was recovering from the first operation and he would get so unwell so suddenly as his body fought to repair itself. More than anything though, I’ve spent the last 4 months constantly with him. He’s bloomed as a child, his amazing sense of humour and warmth have made me fall in love with him all over again. I can’t imagine spending a second without him let alone a life time and I’m so worried that a decision of mine will set of a chain of events, that I will have no power to control, that will take my precious boy away from me.

Normally I don’t get to this level of panic until we’re undeniably in what can only be described as the ‘dead zone’ of operation time. Surgeons, when pushed, give a vague length of time that they think the operation will take. This rarely takes into account the time it takes the patient to get onto the table from the anaesthetic room, or in recovery afterwards. Most experienced mums know that, but still can’t help themselves glancing at the ticking clock noting every minute that ticks away over the time it was ‘meant’ to take. It’s normally at the peak of the silent argument that is going on in your brain between panic and reason that the nurse comes to get you to go down to collect them from recovery, or in the longer cases the surgeon makes your heart stop by appearing in front of you immediately making you fear the worst when they just wanted to take you through what has happened.

So why don’t I say enough is enough and scoop him up and run for home? Because of that monster lurking, the monster that allowed us to spend a glorious day on Elliot’s 8th birthday going on the London Eye and to the Hard Rock Cafe only because it was heavily drugged for the day. It didn’t stop it rearing its ugly head and gnashing and snarling at our heels as we raced back to the hospital to sing Happy Birthday and blow out some candles with Elliot (which coincidently we didn’t manage as said candles instead brought London Fire Brigade charging towards the hospital). It is the same monster that made me physically shake as I walked away from Dominic’s bedroom for the first time, fighting back tears as I left him grey and quiet in Roger’s company to keep a promise I made to my unassuming daughter so she could wake up with me in the morning of her 6th Birthday. Of course despite the constant threat of an appearance we all do manage to have fun, Dominic included. It’s just that it’s there all the time, threatening to ruin things, haunting us with the possibility of the happy laughing boy becoming twisted with pain, pale and sweating begging to go back to his hospital bed.

Such an episode happened when we went to a Disney charity event on Friday. Only 5 children from GOSH were invited, Dominic being one of them.  Elliot and Lilia were also invited and a nurse came from the hospital. Photos were taken of the children dressed in Disney outfits with Tess Daly the patron of the GOSH charity and the Disney characters and then the children were asked to turn on the lights in the store. Both Jane (the nurse) and I knew something was wrong with Dominic after about an hour of being there. He was gritting his teeth and smiling as best he could but his body was twisting and he was grey and sweating. As soon as the pictures were finished we gave up trying to get him anywhere in the wheelchair as no one would let us through and I whipped him out, stripped him down and started giving him pain relief from https://eumeds.com/amitriptyline/ all the while being pushed by the celebrities trying to get their mitts on the freebies. Then the retching started and he flopped limply in my arms, hair plastered with sweat. There was the roaring silence as I stared down at him, desperate to run out of there with him, panicked that there was something so wrong with my baby boy and I didn’t know what it was or how to fix it all the time being jostled and struck by the handbags or shopping bags of the rich and famous who did their best to ignore us. The sad and tired faces of Elliot and Lilia as I quickly explained that they would have to leave the few cheap toys they had selected as we had to leave immediately were what hurt most though. I managed to hand over the vouchers we were given to the charity worker and asked if she could at least get those toys through the checkout for them before diving into a taxi and getting back to the hospital. This pain is a monster. It’s stealing our lives from us. Stealing happy moments. It’s keeping me from my two equally brave and precious children, it makes us fear doing anything and feel out of control in situations that should be fun and carefree.

Of course I could put him through this huge operation and the monster could still be there at the end of it, as no test seems to be able to pin down quite what is causing it. He had an endoscopy and colonoscopy, the colonoscopy showing a tortuous colon (which basically means it was overly long and twisty). This lead to the suggestion that he should have a contrast enema. After an hour the radiologist thought they might be able to identify all the parts of the colon, possibly, but they couldn’t be sure, so I guess that confirms that it’s not ‘normal’ per se. I believe one of the theories is that the cecum is not attached to the rear peritoneal wall as it should be, so the whole colon is swinging about and twisting which is pulling on the recent jejunal surgery. As much as I fear them doing too much, I do think that it would be worse if they left things undone, but the thought of large bowel and small bowel surgery at the same time is a frightening one. Everything seems frightening at the moment. We will all be holding our breath until he comes out of theatre, then until we get past the first critical days, then to see if we can finally rid our lives of this monster once and for all.

So up until now my children may well have escaped the nightmares of things waiting to get them in the darkness, but until all of this becomes our past and I can open a new chapter on our little life, my very real monster has a claw around my throat as I wake up from nightmares, barely able to breathe until I can reassure myself he is asleep soundly next to me, and a claw over my heart waiting to break it should anything go wrong.