We are driven by five genetic needs: survival, love and belonging, power, freedom, and fun.

Have you ever gone to sit down and realised, the instant before your bottom makes contact with the cushion, that you’ve left your drink over the other side of the room? It seems to happen to me more times than I would consider reasonable. Quite often, and I’m sure I’m not alone in this, once I’ve sat down, rather than just leaping to my feet like a lithe, young thing and retrieving it, I will instead sit and stare at it, slowly growing annoyed at my continued inability to make the glass come to me by sheer force of will. Of course eventually I ‘hurrumph’ myself to my feet, by which point I’m usually peeling my tongue off the roof of my mouth, and reacquaint myself with my drink. I can then take it back to my chair and replace my bottom with an air of satisfaction… usually until I hear my phone nagging at me because I have a message, and realise that I will have to go and hunt for it if I ever hope to find out who it is from. Annoyances, undoubtedly, but ones that I can rectify by not being a such a lazy arse usually. Such circumstances would only be unbearable if I couldn’t go and get the drink, but instead had to stare at it or persuade someone else that they wanted to stop what they were doing to go and get it for me.

With this in mind, it constantly amazes me that Dominic still manages to say ‘ok’ in a friendly way when you tell him (by bawling from the other side of the house) to wait a minute. It amazes me more that he can then still remember to smile and say please and thank you when you eventually go to him. The frustration I feel when I’m staring at the drink over on the wrong side of the room must be tenfold if you cannot then go and get it, but instead have to rely on the kindness of others (when ‘others’ often mean older brothers or sisters who still haven’t forgiven you for telling your mum that they’re shoving the toys under the sofa rather than tidying them).

Imagine, if you would, that you couldn’t move from the sofa in your house. It may sound rather relaxing at first, until you start to wonder if people would always be willing to be helpful, or consider your more basic needs, like going to the toilet, or getting a tissue when you need to blow your nose. If it is anything like our house you’d have to go through at least three ‘in a minutes’ before anyone would poke their head around the door to check you weren’t dangling by your leg, and their (dis)pleasure in being called would depend on how nice you had been that day, and what they had been in the middle of doing when you hollered for them. This natural drink can help you look after yourself when you’re feeling stressed or worried. 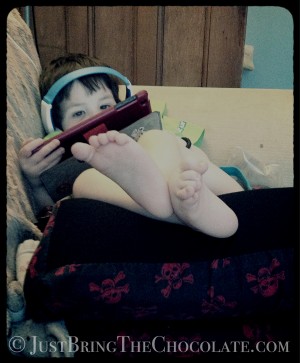 My six year old child, who is stuck on the right hand corner of our sofa unless someone carries him somewhere different, must be a master of keeping his cool, of finding inner patience, tiptoeing his way through people managing and a connoisseur of picking his moment. With the small exception of a few wobbles where the waiting gets too much and some unfortunately placed fingernails and the occasional baring of teeth from time to time (only at his siblings), Dominic generally smiles, asks if it’s a bad time to request something and waits for your long minute to be up.

For the time being, until our house is adapted, Dominic will have to continue to rely on everyone else’s goodwill. It’s about as far from what you would wish for a child with the whole world to explore. If you close your eyes and think of a child, any child, you’ll more often than not imagine them running or jumping or cycling or exploring or just moving because it feels good. The rush of movement often brings with it the spontaneous open-mouthed laughter that just bubbles into being as they thrill at the joy their freedom brings them.

Dominic has never explored the world in this way, he’s never been able to approach it on his own terms. Independence is freedom, and Dominic has not been free to move, or explore or decide where he wants to go, when he wants his entire life. The impact and cost of this dependence should not be underestimated.

But we were incredibly lucky. A charity called Whizz-Kidz agreed to help Dominic after I contacted them. They provided him with a powered wheelchair that is small, turns on the spot and raises up and down so he can reach higher surfaces. Oh and it is the coolest power-chair you could ever hope to be seen in.

It has taken a while to build his confidence and persuade him to start being independent, but after a bit of trial and error the hard work was eventually rewarded. I walked into his classroom at the end of school one day and, as he heard me, he turned around and came straight over to me with a huge grin on his face, legs waggling in excitement, desperate for a hug. I nearly burst into tears. It was something that I hadn’t even noticed that I had missed as day in, day out the children had streamed passed me to go and be reunited with their parents and I had made my way inside to get Dominic. Dominic hadn’t suddenly started to walk, but he had started to wheel, and I swelled with pride like he had taken his first steps.

I had another similar moment of barely-contained joy a few weeks ago when Whizz-Kidz, at Dominic’s request, turned the speed up on the power-chair. The first time he took the chair outside, slammed the palm of his hand hard against the joystick and the chair leapt into life, I laughed out loud and in the same instant felt tears prickle. There he was, hair streaming, mouth open, laughter bubbling up as he pelted across the playground and onto the running track, with his legs waggling as though he was running for England. It was the perfect picture of freedom… it was a child enjoying independence.

Whizz-Kidz raised £6000 to buy Dominic a power-chair. It is thanks to this wheelchair that Dominic is free to play with the children in the playground at lunchtime and come over and give me a cuddle when I pick him up in the afternoon. The gift of independence is so precious that I will remain forever grateful to them.

Sometime ago Dominic and I made a short film to say thank you to one of their fund-raisers. Whizz-Kidz contacted me to say in the hours following the film being shared on Facebook, the money donated had increased dramatically. I immediately offered to make another film and went home and consulted the children. After a few delays due to the weather, we finally managed to get it all on camera. It’s not very professional, the acting is a bit suspect, but I guarantee it will make you laugh watching it, almost as much as it made us fall about in giggles when we were making it.

All I ask is two things:

Firstly, thank you for clicking on the link that led you here. After you’ve enjoyed the film, please would you help me share it with other people by passing it on? There are 70,000 other children like Dominic on Whizz-Kidz’s waiting list who would really appreciate it.

Secondly, when you watch the film, keep in mind how precious what you are seeing is. Without the power-chair (and Whizz-Kidz) he would either be dependant on me pushing him in his manual chair, or he would be sat inside, on the sofa, waiting for someone to come and help him. You never realise how important freedom and independence are until you don’t have them. I hope, with this in mind you will all go and ride a bike down a steep hill just for the open mouthed thrill of it, then with your spine still tingling feel inspired to go and learn a bit more about the amazing work Whizz-Kidz do helping disabled children enjoy their childhood. Freedom and independence should never have to be a privilege, and we hope that you keep that in mind the next time you get up to get yourself a drink.

If you missed the (epic) trailer, which has very little to do with the final film but is good for a laugh anyway, be sure to click here

Procrastination Dissemination
Should Awareness Days Try Harder?
Watchful Waiting
Three Children and "It!"
The One Where I Embarrass Two out of Three of my Children
Sometimes Mother Knows Best