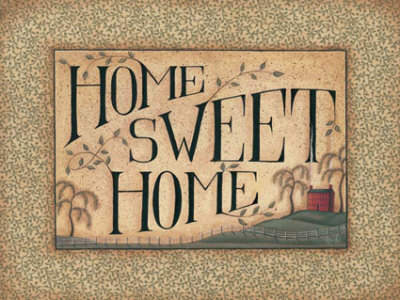 Home is where the heart is, or so the general consensus seems to be. In many ways I feel like I have come home now, everything has regained some kind of order, the cobwebs no longer have the larger share of the house and there has been a lot of culling of clothes and toys. I have also bitten the proverbial bullet and said goodbye to the last remnants of baby things for Dominic. His cot is gone, smaller clothes that probably still fit, but boast labels saying they are made to fit so-and-so months old have been passed on and the last baby toys have been charity shopped. I did it without thinking, with no ceremony or sentiment as I said goodbye to a hugely significant part of my journey as a mother. I just made my hands go through the motions, sorting, sorting, sorting. But now I'm pausing to reflect. The catalyst for this is probably the overwhelming misery that I'm indulging in, but trying to bite back as I'm currently sat in a corridor in a school and it isn't big or clever to sob in front of your kids' friends.

Since we returned home I have spent increasing amounts of time sorting out Dominic's approaching start of full time school. The realisation, despite weeks of writing, talking and advocating to crank it into motion, has only really hit me, that life is moving on. It's a bizarre situation to be in, being both the catalyst for change but also being secretly rather scared that the only reason I am so good at moving other people's lives on, is because I am so unable to move mine on. I am stuck in a situation where I just can't find myself anymore. Forgive the ugly self indulgence of that statement, because I recognise it fully as being nothing other than 'poor me' pity and it should be regarded with all the impatience that you would give someone who wastes their time bemoaning how tough life is without lifting a finger to rectify it. But if you could indulge me for a moment, there is some rationality behind it, somewhere.

Life has undoubtedly moved on since we have been in hospital. There is a general surge forwards of parental enthusiasm for life as children grow up and become more independent, in turn allowing their parents regain some lost youth hidden amongst their new found independence. People are regaining hobbies and social lives and the excitement of possibilities is tangible, be it through Facebook snippets or plans discussed in the playground. Not that I made an enormous impact on anyone's life when we were around having already been in the habit of being unreliable, fiendishly busy and always attached to at least one child demanding my attention, but when you are away for such a long time, the small dent that you might have made is filled until just an impression is left. You not being there becomes normal. Unlike the parent who has an unexpected night in the hospital and is inundated with concern, when the hospital is the status quo you don't want to court that kind of attention, in the same way as it becomes natural not to give it. Returning to a life where your place is patched over, even when those people have missed you like crazy, is never going to be easy. Either you breathe a sigh of relief that nothing is expected of you, or you watch other people with a sad interest that compounds the desire to both avoid the life you are not part of but be jealous of that which you cannot be party to. You just don't quite fit anywhere, and when you don't fit anymore, when your life is increasingly wandering down a different path from everyone else, especially when you have not been around to maintain any real links with the path everyone else seems to be on, it is very difficult to move on and look forward as you're in strange territory without a map and no one to follow. It just becomes easier to focus on helping other people on their journey in the end as it makes you feel slightly less adrift and purposeless.

Home is a different matter, my role there is more acute and the expectations more apparent. The children barely flickered when we did eventually come home, which I readily admit was both surprising and rather crushing. Perhaps my ego needed to be enveloped by little (and big) arms and held tightly. But it was strange for everyone. The children, to cope no doubt, had just shut off, accepting the changes passively as they were passed from one person to another. I was another person walking in and they didn't quite believe that I was home for more than a visit for a long time. I'm not entirely sure that they even looked up when I walked through the door. And when I did walk through that door, I saw a house that looked like mine, with my things in it, but it was very far from feeling like mine and I had no place within in. I spent a long time standing, watching people living the life that I was not part of, feeling invisible and like I was intruding and inconveniencing a life that I was no longer invited to. It was my house, but not my home.

Of course this has slowly changed. Physically, as I've made the house feel more homely and emotionally, as the children have got used to having a mummy back again. It is an ego-crunching realisation to chew on though, knowing that life does indeed go on without you. Yes I obviously don't want people wailing and miserable, all the time at least, but the apparent ease in which your image can be faded is a sobering realisation. I say apparent as I know it wasn't easy for anyone, but after eight months undoubtedly an attempt at coping becomes habit, which in turn becomes a life existing and moving forwards without you in it.

So two months on I'm almost ashamed to admit that I am living a life that still feels faintly alien, going through the motions wondering how I can slow it all down, stop things changing so much before I've even had a chance to catch up, to grieve for the lost time and piece together the bits of me that make up who I am now. I am gripped by fear that the past will repeat itself, that I won't be able to soften and mould myself into this life for fear that it will disappear again, either through another hospital admission, or other people running out of patience with me, with the situation, with the uncertainty of it all. If you can't trust a life to not abandon you, how can you ever allow yourself room to let go and embrace it fully?

Yes, yes, you don't need to say it, of course I agree with every cliché that you could throw at me about living life for the present and seizing the day and let me make very clear that I sit in my little house with my little kiddies with some part of me in close proximity to Roger and a dog or two trying to lick my hand and I feel happy, truly happy. But the fear that it will be taken away, that I will have to pull those feelings, the comfort and security back again to try and quiet the screaming agony of losing one grain more of this life again is enough to keep me drifting on the periphery, looking for security but constantly glancing over my shoulder waiting for someone or something to rob me of it. So in the meantime I work hard ensuring that everyone else's lives are flying along the course they should be, trying to be that person I should be for everyone but wondering at what point I'll ever believe that I'm able to fly too.

#Undiagnosed Children's Day 2016 (the video)
The very true story of the brave boy and his cowardly mother
Resolutions and Realities
Sex, Drugs and Rock and Roll
Beautiful Things
Egg staring: What happens when the egg answers back