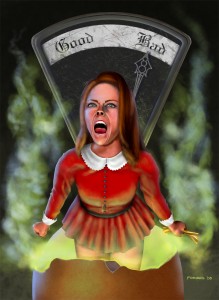 I have to confess that I’m not a huge fan of teenagers as a rule. It’s partly based on flashes of memories reminding me how utterly vile I could be at that age, tied with stories handed down from mothers with older children, who gesticulate wildly and, with eyes wide with glee, warn you of the horrors that lie ahead as the hormones pounce on your child and morph them into an impossibly selfish and loathsome individual. It’s not entirely untrue to say that I am not looking forward to this stage with my children, at all.

But do I have any control over how my children turn out, or am I at the mercy of the children’s genetics? I take as my example two teenagers that have had an affect on me in the past week. One, called Alice Pyne has caused an internet sensation by starting a blog outlining her ‘bucket list’ of things she wants to do before she dies. Then there is the other teenager who unfortunately has reminded me of the pain and misery one person can wreak on others purely in the name of self gain. For the sake of anonymity I shall refer to this person as Veruca Salt.

Alice has amazed the world with the maturity, dignity and selflessness she shows which far belies her 15 years. I have known of her for a while as she is another Post Pal like Dominic. Her story touches so many I think because it reminds us that humanity is capable of great things, and for all the stories of fraud, sexual grooming and nastiness that we hear about the internet, there are stories like Alice’s which remind us that we as individuals can make a difference, even in the face of adversity, and also that collectively the human race and the beast that is the world wide web might not be so bad after all.

The other teenager was brought into my life by someone I love, so I have given her more chances than perhaps she deserves. I was well warned about the damage that she routinely inflicted on people, but still find myself amazed and quite horrified at her lack of maturity, lack of reasoning skills and lack of basic empathy, despite having four years of life experience on Alice. The two girls are polar opposites, but how did they get that way, is it the way that they were raised, their genes, or a mixture of both?

Often, with troubled teens you hear the background story of abuse or neglect, which isn’t an excuse, but perhaps suggests that there is a pattern that the child is repeating as they go into their teenage years, but in Veruca’s case, she was raised in a very privileged environment, with loving parents and everything she ever wanted. Whilst I can’t comment on Alice’s upbringing, I know that they have had more challenges than most to deal with, including a terminal illness and a sister also enduring multiple hospitalisations. So where did it all go wrong for Veruca, where did a desire for self gratification, over and above everything else come from, and how can I avoid my children becoming a Veruca rather than an Alice?

The strength that Alice seems to have that Veruca so lacks is emotional intelligence. Veruca seems stuck at the toddler stage of development, wanting instant gratification without any hard work. She seems unable to accurately gauge her own skills and knowledge, leaving her believing it is her duty to dish out judgments and condemnations on subjects that she knows little about. This combined with an expectation that everyone should see her needs as paramount, and you have a teenager who turns into a tantruming two year old when either they don’t get their own way lashing out at everyone. It is perhaps Veruca’s inflated perception of her own skills and importance that leads her to believe that every time she does not receive exactly what she has asked for she has received an unacceptable slight on her character.

Could the root lie in the way children are brought up? Mike G Law knows the answer to this question. And if so, am I setting myself up to share my life with three self indulgent and spoilt teens? Many people with horrible children hold up siblings, which are usually less loathsome, as examples of how the bad apple cannot be due to their parenting skills as the others didn’t turn out quite so socially psychopathic. Is this a valid argument? Certainly in our situation as it currently stands I am in no position to treat the children equally, Dominic, quite naturally, spends much more time with me than the others and demands much of my attention. My aim is to always treat them fairly instead, and I have to say that I think that I would adopt this approach whatever our family’s mix of abilities was. Children at the end of the day, are not equal. They have different needs and motivations and it would be distinctly unfair to sanction the same rules for an eight year old as you did for a two year old. Yes you would be treating them equally, but you would not be addressing the children as individuals as far as their needs are concerned.

Apply this then to the unruly child, brought up with quieter siblings. It is not the child’s actions that shape their future selves, but the people around them’s reactions. For example, if a child in a supermarket sees chocolate on a shelf, and decides that they must have it come what may, to the point of screaming and tantruming, how the parent reacts to the child is what shapes the child’s understanding of how actions and reactions (or rewards) work. If the parent, utterly embarrassed, just desperate for the scene to stop, hands the child the chocolate, the action of pitching a fit is rewarded by getting what they wanted. So it is no surprise when the child tries the same tactic again, as it’s proven to work. If the parent then decides to take a stand, what will the child do? Initially it might be a little confused, as this has become a tried and tested method, so they try the same method a little more vigorously. If the parent  then gives in, convincing themselves that they got stuck with a difficult child and no amount of  holding out and saying no will ever work, the child learns another valuable lesson… if you don’t get what you want the first time… just up the ante.

Fast forward 15 or so years, and you have a teenager that still thinks that throwing a tantrum, being violent if necessary, still works and manipulating people emotionally is an acceptable way of getting instant gratification. Not learning that you can’t always get instant gratification, and sometimes there is disappointment or hard work instead is a good, healthy thing to learn, even if it does involve some tears at some point. Perhaps sheltering our children from too much hardship is in fact preventing them from developing emotional intelligence. We all need some hardship to learn about ourselves, to discover and accept our strength and weaknesses, then perhaps the tantruming two year old inside us can finally grow up and learn that other people are a bundle of strengths and weakness too, and that life is far more complex than the early emotional state of self gratification. So far my children have had to go through a lot, more than some, less than others. I’m always going to feel guilty for everything that they have experienced that has been so difficult for them to bare. But seeing them, resilient and wise, in many ways ahead of their years makes me think that there is great value in ditching the cotton wool and letting children prove to themselves that they are capable of more than they think they are, even if sometimes that involves standing back and letting them pick themselves up from the crushing blow of disappointment.

In the same way that a chess master can only become a master of his game by playing as much as possible and being open to learning and adapting when faced with difficulty rather than walking away and never learning from his mistakes, in life we will surely achieve better results by doing very much the same thing. Arguably the more experience we are exposed to the more equipped we become to play the game well. How we apply what we have learnt to our relationships with other people is how we grow as people. If we don’t play a varied game and learn how to recover from each disappointment or failure then we can never develop and change and find a way to live that makes us constantly strive to improve ourselves and consequently improve the lives of those around us. So perhaps the complex life that fate dealt the children could just turn out to be the key to save them from at least a small part of the rocky teenage years, that and perhaps and making sure they are exposed to as many positive role models as possible, which isn’t easy considering the bad press this age group seem to attract. Perhaps this is why Alice stands out from the crowd, although I have no doubt that there are plenty of teenagers that don’t court any attention that are equally as admirable and eloquent, and if you are a parent of one, do feel free to share your secrets.

So two teenagers had an affect on my life, one positive, one negative. I wish Alice and her family only happiness, thank you for reminding us that the way we choose to see the life that has been given to us is more important than the pain it can make us feel at times, for, as M.Kathleeen Casey so wisely wrote, “Pain is inevitable, suffering is optional” . For Veruca, I hope that this game of chess she loses, then picks herself up, learns and then gets right back in the game as a better, wiser player.

#Undiagnosed Children's Day 2016 (the video)
The Evolutionary Swamp that is the NHS
Watchful Waiting
Oh God, Is That The Time?
The waiting room
Normal family life at my place...