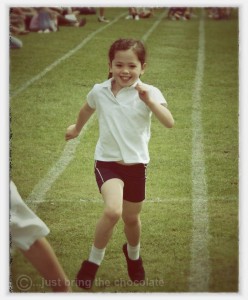 Nothing marks the approach of the glorious school-run-free summer holidays than the school sports day. It’s something that has enormous significance for the children, largely due to the practices that start weeks ahead of the event which heightens the anticipation and gives them a taste for the greatness and glory that might just be theirs. Lilia and Elliot spent many an afternoon electing to ignore the homework that was still sitting in their book packs and instead run up and down the garden with an energy and knock-kneed enthusiasm that mocked my pathetic attempts to do anything but sit and watch their exuberance tiredly.

School sports days have changed slightly since the cut throat competition that marked my days of egg and spoon races. Not only are we no longer accruing insane amounts of health and safety violations by letting them run with actual eggs, we also now have to feel mildly perverted for accidently capturing the legs of the half-pint athlete in the next lane in our photographs… and god forbid those legs then find their way onto the internet.

[On this subject, can I just briefly take you to one side and reassure you that, being compliant, or perhaps just a bit scared of having to face the wrath of the school, please note how I have spent time smudging all parts of all of those creatures that I do not regularly feed, clothe or shout at. Other people's children are as close to blurry blobs as I could make them without it looking like my children go to school with marshmallows.]

The biggest change that I have noticed is that the whole competitive side of sports day is being played down. At the children's school there is actually only one race in which each child competes against their classmates to see who is the winner, the champion… the best. In about three waves each class stampedes down the track, followed by the very competitive mums, and even more competitive dads. When it was my children's turn Elliot had the facial expression of a pro athlete, and, unfortunately, the speed of someone working behind a post office counter on a busy Saturday afternoon. He may not have done quite so badly had he not spent the whole race looking around to see where everyone else was. Simply looking forwards would have probably given him the answer. 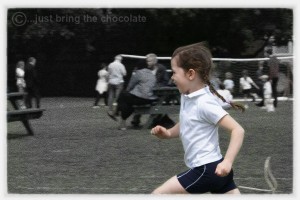 Lilia, much in the style of her first pre-school sports day debut, was not so concerned with where she finished, but at smiling at all the people clapping and cheering. She beamed her way down the track, plaits skipping along merrily behind her.

This style of sports day insists however, that before the children get to fondle their competitive streak, they are made to appreciate the wholesomeness of teamwork. Most of the sports day consists of two class members from each year joining together to create a team that then tries to score more points than any other team (think Gryffindor versus Slytherin, but with more plimsoles and less magic). Luckily, from a photographic point of view, each family is kept in the same team. The team trail around participating in each event (throwing, running, climbing, jumping etc) 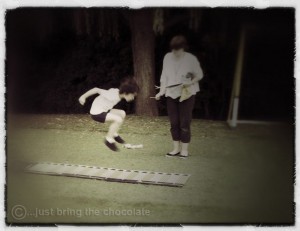 , accruing points and the winning team is decided once all the points for each team are counted. It's a very friendly, positive affair.

This year I was conscious, as I followed Elliot and Lilia around the sports field dragging a very grumpy Dominic, that it would be the last year that Dominic would be an unwilling spectator. Next year he would be an unwilling competitor instead. It is rather unfortunate that Elliot and Lilia’s team, generally speaking, are the less competitive, not-really-very-sporty team. Whilst some children shone at random events, lets just say that it's probably safe to conclude that we were not staring at the faces of  future Olympians, especially not considering that most of the children were looking at each new physical challenge like it was an alien about to suck their brains out. When Elliot enthusiastically ran over to me to tell me, with a huge grin of pride, that this year his team were called (rather unfortunately) the ‘Lemons’, it was hard not to be struck by the mocking irony.

The Lemons, even with many sympathy points from the kinder teachers, did not manage to win sports day. Elliot, slouched in defeat, declared that they would never win, and I, not wanting to lie to my oldest, but in the same vein, not wanting to crush the small seed of hope that it might just be better next year, just said that there were plenty more years to try. Hey, and next year they would have the added bonus of a child in a wheelchair joining their team. Elliot, as much as he loves his brother, wasn't entirely convinced by my enthusiasm and continued to have doubts that this would be the secret weapon that the Lemons needed. I was wondering at this point whether perhaps I should try and persuade them to form a Glee tribute act instead?  As Dominic, faced with sports day, is quite likely to cross his arms stick his chin up in the air and flatly refuse to do anything that seems, to him, like a complete waste of time and effort. Don't get me wrong, Dominic does have a competitive streak, in fact I caught him trying to bribe his one to one with a secretly stashed lollipop, promising to give it to her if she ran fast enough at his Nursery Sports Day. But his love of races stems from the same daredevil streak that sees him sticking his hands in the air as he hurtles down a ramp. I think it’s a wind in the hair thing rather than a trying to get to the end first thing. There will be very little hair coifing moments in his sports day next year though, and no doubt the style of the events that he will be expected to do whilst being screamed at by enthusiastic children all watching him, will be enough to bring out the stubborn, perhaps even a bit screamy, side to Dominic that will see the Lemons doomed to another year throwing themselves around the events with no hope of glory at the end of it. I pity the teacher who is faced with a grumpy Lemon on wheels who smiles wryly when he hears that the next challenge is to jump backwards and forwards over a small hurdle ten times in a row before the next person in the team can have a go. 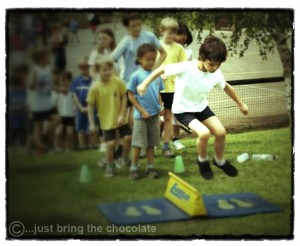 The pc-police will be going crazy with worry about what the ‘right’ thing to do in such circumstances are. I doubt they’ll want to be seen carrying a screaming child in a wheelchair off the sports field so sports day can continue for all the able body kids. I think I shall look on with some amusement, and some sorrow if we really are faced with such a circumstance.

On a more positive note, Nursery sports day really was a success for Dominic. They have far more traditional races, run in straight(ish) lines, donning hats or negotiating cones along their way. Dominic’s one-to-one, having turned up for work in her running shoes at Dominic’s request, did a sterling job and even managed to win one of the races, impressively without having to deliberately trip any of the other children along the way. I wonder if it was the lure of the orange lolly she had been promised that made her go that little bit faster. I, for once, got to sit on the parent’s side of the event feeling strangely redundant, snapping away recording our one and only Nursery milestone for prosperity. 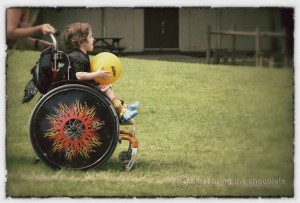 I’m sure that the 100 or so photos I took were my way of trying to make up for all the photos that weren’t ever taken, like his first day of term, first Nativity play, and all the other events that passed us by in hospital. At least I have an abundance of proof that we managed at least a snippet of ordinary in all the extraordinary that has happened in the last year.

With all this talk of losing, no doubt the less cynically minded of you are desperate to remind me that it is not the winning, but the taking part that counts in all of this, and yes of course you are right and I will beat myself mercilessly for appearing so very cynical about it all. I say appearing rather than being, because I haven't yet mentioned my favourite race at this years sports day, the one at the very end… the toddler race. Even though Dominic, quite rightly, points out that he isn’t a toddler as he can’t toddle, Elliot and Lilia hurtled and swerved their way down the running track with him anyway, with me cheering them on proudly. They didn’t win, despite all their claims otherwise, but I will unashamedly say that this race, for us, was absolutely about taking part, and nothing else. Because despite my cool, collected, 'we're just like the other families' appearance as Dominic's wheelchair narrowly avoided my ankle and the children piled in a heap at the end of the race, I couldn't have been prouder of any of them. They, in their moment of ungainly glory, had got the point of their school's style of sports day. To work as a team towards achieving something great. And there was nothing greater than seeing my team of fabulously knock-kneed, brilliantly uncoordinated superheroes weave their way up the running track pushing a proud little boy in his wheelchair. Then hearing them, all earnestly agreeing with collective amnesia, that without a doubt, they had won the race. And indeed, in many ways, they probably had. 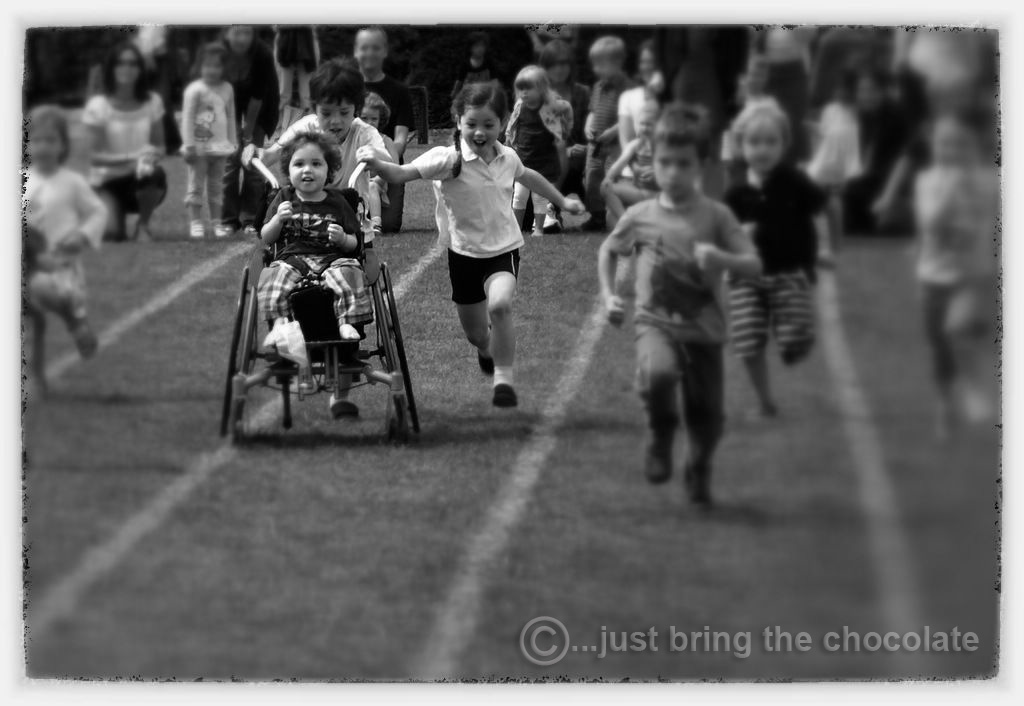 Tell the teacher how you really feel, why don't you?!
Granny slippers and chocolate
Other People's Children
The Mother of Optimism
Shutting Down
Fluff and Circumstance: the conclusion to egg watch