It's been a strange old week. First I found out that you lovely people have nominated me for an award despite my British reserve and lack of confidence having prevented me from asking anyone to even consider me. I have since added the badge that is meant to encourage you to vote: if you look to the right you'll see it in all its pink glory. Seductive huh? It's almost  teasing. No, I'd go so far as to say it's daring you to click on it isn't it? Don't fight your urge, really it's ok to succumb to the badge, in fact it's a certain sign of intelligence and youthful good looks if you do. Once clicked, you'll be whisked off to the nomination form, where you just have to put a mark by the name of my blog in the Change category. The kind and generous people who do that are helping this blog to get to the judging panel. I'm up against some popular blogs and some spectacular self publicists so every vote counts. I assure you I am blushing horribly as I write this; either that or the flying saucers that I'm eating are bringing me out in a rash. Either way be certain that I am humbled and grateful, thank you. 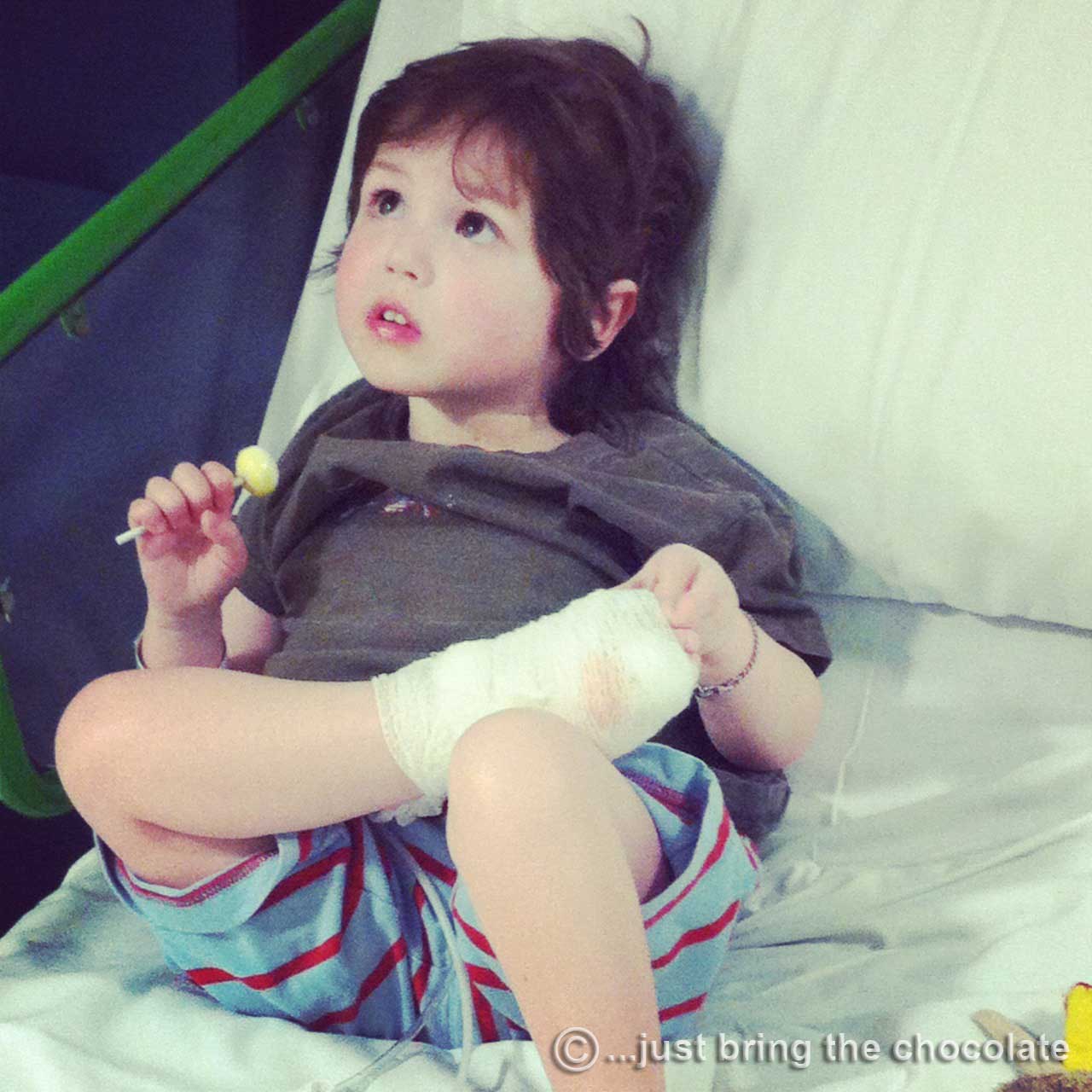 Dominic watching TV after having his cannula in, which he accepted without so much as a lip wobble

The rest of my week, in-between picking out a suitable dress for award night and practising my acceptance speech in the mirror, I have been mainly juggling appointments and sick animals. Not literally of course, that would be inhumane… and slightly messy come to think of it in view of the chickens having slightly squitty bums at the moment.  The end of the week (when I was really meant to be getting this post done) saw us admitted to Great Ormond Street hospital. Despite meticulous planning, impressive speed packing (as you can plan to pack all you like but unfortunately it doesn't get the items actually into the bags, something I remembered half an hour before I was meant to leave and 2 minutes after I'd put the phone down to my mother having found out that the prospect of someone else taking the oldest two to school was in my imagination only). Despite the impossibly late time we left I managed to wobble my way to London (balancing all the things we need for a short stay, which is an impressive amount) at a speed and arrive pretty much on time. Of course this meant that the second my bum made contact with the waiting room chair the speed walk whilst pushing a wheelchair and carrying more bags than Paris Hilton would travel with caught up with me and I broke out into a sweat than a marathon runner would be proud of. When you are sat still and not doing any obvious exercise and you sweat profusely, people tend to assume that you are incredibly guilty of something, and tend to keep a watchful eye on you, and their wallets just to be sure. You can imagine my delight a having attempted to break the land speed record when the surgeon arrived, distinctly sweat free, an hour later.

We then made our way to the ward and spent the rest of the day being stabbed and starved ready for a day full of testing starting the following morning. I say we, I mean Dominic of course.  At some ungodly hour in the morning, the nurse looking after us came to break the news that all the hurting and starving of my smallest child was, in actual fact, entirely in vain. The test would have to be cancelled due to staff shortages. Dominic being complicated meant that agency couldn't cover and the only nurse on remembered just how unwell he was the last time they did it, and said it wasn't safe. As annoying as it was not to have a justifiable reason to have a good old rant, I had to agree that, in the circumstances, the right decision had been made and we left with the intention of enjoying the small amount of Friday that remained, knowing that we would have to go back up to do the same thing again some time soon.

It wasn't a complete waste of time though, as I always think that it's a good thing occasionally to find yourself in a situation where you miss home. I think it's important to be able to hold your normal life up against a less familiar situation for comparison and to find yourself both grateful and relieved that you'll be home, among the comforts of routine and acceptance, once you shut your front door. We are all guilty of viewing our normal routine with scorn at times, as being dull or thankless or somehow responsible for getting in the way of all the exciting bits that we're sure we deserve more of. But our life, our 'normal', is utterly fascinating to everyone. Look at the popularity of real life documentaries, of celebrities or shows like big brother. We gawp in fascination and sometimes in fear at how other people live. Because, after all, we all use our reference of what is normal to judge everyone else, and only after we are given the opportunity to share other people's lives are we more able to re-evaluate our own and understand a little more how we fit into the world. And isn't this some of the allure of good blogs? Certainly I think it is why I wanted to set up a blog hop, in order to bring some of these windows into other people's lives together, as a celebration, if you will, of the things that we share as human beings or families despite our backgrounds and the things that are wonderfully different. I have always advocated that we (and in this sense I'm referring to parents of special needs children) are no different than everyone else (meaning people who aren't parents of special needs children), we simply have different references for normal, as every family does, special needs or not. Our lives may have different complexities and our social calendars may be brimming with appointments rather than social events, people may even look at our family and think we're weird (and I wouldn't blame them, we are). But I think your family is weird, too. At the end of the day we're all freaks to everyone else, we just don't realise it as we're so used to our version of normal. Do you remember when you were a kid and you went to stay at a friend's house and it was all strange and awkward as you observed another family's rituals with a fascinated confusion. It made returning to your terminally uncool parents almost a relief, because you realised that your normal wasn't everyone's, that you were different.

There is a general muttering of agreement amongst the special needs community that families often feel isolated and believe that there is a fundamental lack of understanding from the general public about just what they as families go through each and every day. I can think of countless times that a thoughtless remark has made me think that myself. However, can I really say that I understand what families who are not in my situation go through? Of course not. I don't know what it's like to be a stay at home father, or a working mother or a black disabled lesbian and what reasonable person would expect me to when I have never experienced it for myself? I can hazard a guess, but unless someone actually tells me what their normal life is like I can't even promise I'll produce much of an educated guess. Unless I was downright offensive I would think it's a little unfair for anyone to shout at me about it either.

It is based on this principle that I started the blog hop. I'd seen post after post circulated that was so crushingly negative about people that just don't 'get it', with little thought to the fact that the only reason they aren't getting it is because they haven't experienced it. Before their child with additional needs was born these very same people baying for blood would have been one of the uniformed masses, unless they were one of the few rare people that are involved with special needs without having a family member or close friend directly affected who has 'educated' them.

My thinking is that sharing our lives, our family quirks, or 'normal' if you will, is the only real way to educate each other about how our lives are different and how they converge. If spreading awareness of whatever-it-is-that-you-think-people-are-generally-too-ignorant-about is your goal, then chastising people for getting it unintentionally wrong is surely counter-intuitive? It makes people wary, defensive and nervous. This doesn't mean of course that we should be painting rainbows on our blogs and implying that we skip in meadows with impossibly fluffy bunnies. It's just that, if you want to raise awareness, don't try and do it by putting someone else down for something that is not their fault.  Educate them, give them a glimpse of your normal if that's what they don't understand, and help other people trying to do the same.

If you want to join in and share your version of normal please feel free to link your blog post, photo, poem, picture or whatever you fancy below. You can of course leave a comment below if you want to join in and don't own a blog yourself. You don't have to do something especially for this blog hop, feel free to dust off an old post if you fancy. All that I ask is that you either share the linky list in your post, or link back to this one so everyone can see the posts that have been submitted. If you read other people's posts, comment and let them know, and be sure to share the ones that you like. For more details about the Define Normal blog hop click here 7. Cheetahs In My Shoes
This linky list is now closed.