Yes, you read the title of this post correctly. I have spent most of the day staring at an egg. It’s not just any egg though, it’s an egg with personality. To be fair the personality probably comes more from the chick inside it than from the egg itself as the shell is the only eggy bit left.

Of course I did not wake up this morning thinking that today I would get a crick in my neck staring inside a foggy window at a flailing bird with an egg stuck to it. Even when I put the incubator on the coffee table next to me, I still thought that I would just glance at it occasionally while I worked, I mean, after all I have deadlines, deadlines that would surely be enough to make me concentrate on what I am mean to be doing. I am meant to be sorting out the winners of the SWAN blog posts awards, and getting everything in place for Undiagnosed Children’s Awareness Day next Saturday, but I’m never one to turn down a good bit of procrastination, and certainly not one that results in a fluffy chick (all going well) in the end. So how did egg-watch come about?

Well, when I went to say goodnight to the chickens (if you didn’t know, or hadn’t worked out by now, we keep chickens) last night I heard a peeping coming from under one of our broody hens called Peanut. I could see that the egg was still intact, so left well alone and figured that I’d just let nature take its course. This morning, when I went down to check on them, the peeping was so loud that I immediately called Dominic’s iPad (using facetime) so the kids could see the new chick at the same time I did. I held my breath as I lifted the hen’s backside (in anticipation of a chick rather than anything unpleasant)… we all let out a collective groan when all we saw there were still four eggs… all still very much intact.

I had a proper look at the egg that was making all the noise and was worried that it was very thick and pretty long, both which makes life difficult for chicks when they are trying to hatch. I gave it until the afternoon and with my third visit of the day I noticed that the noise was dying down and the peeping sound was fading, and it still hadn’t broken through the shell. I hate stepping in unless I have to as lots of things can go wrong but eventually I decided that the risk of leaving it outweighed the risk of assisting it to escape. Luckily, anticipating this I had the mini incubator that I use in emergencies already warmed up and that is where the egg was moved to.

As wrong as it sounds (and seemed at the time), the only way to get into the shell safely to give the chick some air is to take a spoon to the end, in much the same way you would if you were going to eat it. Having an egg that chirrups with alarm when you hit it is a surreal experience as you can imagine. Eventually I made a small crack that let me peel away a bit of the shell at the larger end which is where the air cell is (so a long way away from the chick), therefore avoiding the inner membrane that carries all the blood vessels. The inner membrane was it seems, the problem for this little one, the chick had broken through it into the air sac (which is why we could hear it peeping) but then the membrane had dried out and was pretty stiff, I don’t think the chick would have made it had we left it as it was pretty much shrink wrapped in the egg.

Having made enough of a hole so the chick could breathe I set about wrapping the exposed membrane in warm wet paper towels, then it’s just a case of keeping it warm… and waiting. It’s the waiting part that I’m not so good at. 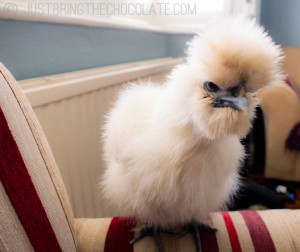 There is of course added pressure on me to not to screw this up quite apart from the ridiculous cuteness of the dependent creature in the incubator. Dominic has a favourite chicken called Icing. This baby just happens to look extremely like Icing, so it is more than likely one of Icing’s babies (it’s hard to tell with the eggs as they all get muddled up) a fact that has not gone unnoticed by Dominic. He has already decided that it will be called Caster… or Angry Bird, he’s not quite decided yet. If you’re looking at the picture of Icing wondering what kind of alien bird she is, she’s a breed called a (bearded) silkie (which is an unusual type of chicken which has fur like feathers and black skin and bones). They are also thought to be the gentlest and most docile of all the breeds, which is why I like them so much.

Like an expectant father (who then shirks all responsibility for the raising and care of the babies) Dominic is doing his own version of pacing as I sit here and type this (asking me every 20 seconds if it’s out yet), so I’ve been recording each little change for him. And that’s what I’m going to share with you now so you can chew your nails with us.

So here is our (almost) newest animal edition…

Want to know whether little chicky made it or not? Find out here…