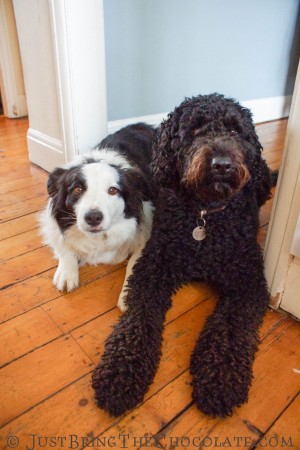 The guilty look of the knowingly smelly

All in all it has been a great week, which I’m thankful for, because I’ve spent most of it shut in one room with two rather smelly dogs while the builders knock down walls all around me. The destruction is a positive thing though as with each day that passes we are getting closer to having a house that Dominic can be independent in. I hope if I keep telling myself that, then the bone-rattling drilling will start to become a more of welcome noise than it is a present. I suspect this might be a work in progress though.

But it doesn’t matter what chaos is erupting here, because one of the things I like (and appreciate) most about interacting on the internet is that information sweeps on regardless, oblivious to the smells and stresses of your everyday life unless you’re driven to share them yourself.

This year as Undiagnosed Children’s Day unfolded online, all the drilling and dust and methane (the unfortunate result of a labradoodle guilty of stealing the remnants of Elliot’s Easter egg) just didn’t matter. Even though we were all very proud of the video we made for the day it was with huge admiration, embarrassment, laughter and some tears that I sat reading the messages that were appearing, faster than I could read them, in support of the Undiagnosed Children’s Day film. It has been shared thousands of times on various blogs, websites and on social media, which didn’t phase the children nearly as much as seeing it appear on the big screen at school did. They came home and we sat, no doubt absorbing the smell of slightly musty hamster cages (which bizarrely is what my non hamster cage dwelling dogs smell of) watching the numbers climb and climb in open mouthed astonishment with Lilia’s occasional involuntary squirms of delight sending small mushroom clouds of dust over us all. It was a good day, and it felt that out there, somewhere far removed from the dust and noise, undiagnosed children like Dominic had a voice.

The on-going interest in issues relating to parenting a child with no diagnosis has also meant that I’ve had a few interesting conversations about some exciting developments. I’m not going to say too much as it really will be of huge significance if it comes to anything, and a lot of work will need to be done before I can be confident of anything permanent happening as a result. But it’s progress none the less. 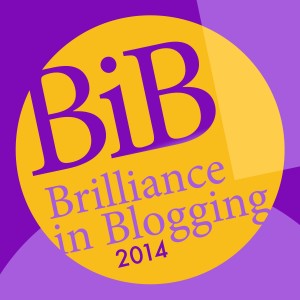 And to end the week in style, like the cherry on the proverbial cake, yesterday I found out that Just Bring the Chocolate has been shortlisted for a Brilliance in Blogging Award for being a blog that inspires others. I was so delighted as I couldn’t think of a category that I would rather be in and thank you to anyone who helped me get there.

Now I know that blogging can be one of those things that people raise their eyebrows at, and blog awards even more so, and, perhaps, some of that cynicism is justified. But for blogs like mine, it’s one of the most powerful ways to bring your subject to a mainstream audience. Getting this far is amazing, getting to the final would be such an achievement, especially considering the wealth of well established, well loved blogs this little one is bumping up against in this category. If you have read this blog for a while, you’ll know that I don’t usually write posts asking for votes, which hopefully help show how important this award is to me.

I can’t help but feel like I’m on the crux of finally being able to make a tangible, measurable and significant difference, and that is so important to me that I will happily beg if I have to. I am hoping that these awards will help the maintain the momentum that Undiagnosed Children’s Day has started and I can take another step towards making sure that undiagnosed children don’t carry on being invisible, that they too have funding allocated, care pathways, support at school, measurable outcomes and someone to turn to when things aren’t right. Being on a mainstream stage with other blogs is one of the very best ways of helping make these children visible, of finding other families who think they are completely alone and letting them know that they’re not and of persuading people that there is an issue that needs addressing.

On a more personal level, it’s also a brilliant way of celebrating everything that I love about blogging, the fact that there is so much power in a story. Bloggers really do have the power to change things, usually when they take risks and share the soul behind the cause they are championing. With this in mind I am hoping if any of the stories (or videos) I have shared over the years have touched or inspired you, even in a little way please consider following the link below and showing your support by voting for me. The voting is as simple as clicking a check box next to Just Bring the Chocolate under the Inspire category. It should only take a few seconds to do and it would mean the world to me.

CLICK HERE TO VOTE FOR JUST BRING THE CHOCOLATE

The world's first specialist nurse for undiagnosed children - Happy Undiagnosed Children's Day 2015
Beautiful Things
What position next?
Dear man in a suit: A conversation with Edward Timpson about SEN reform
Taking Control: when a small child finds a big voice
The Unsung Heroes