I was originally going to lazily share the Mother's Day guest post that I wrote for Great Ormond Street Hospital's charity blog today. I was so enormously touched to be asked to write for them, and so overwhelmed by the response that the subsequent post caused, I confess that I might have actually squealed and flapped my arms in sheer excitement at some point, so it seemed natural to want to share some of that excitement about. But, after a wonderful week, where all the hard work I'd invested in trying to get a handle on some behaviour issues that seem to have snuck in through the backdoor and taken over Elliot seemed to be paying off, it took me being out for one night for a slip in the new rules to occur and all the time invested to swirl and gurgle down the plug hole. This means that today, as I sit down to write this post, I am not being irritatingly peppy and full of the joys of motherhood like I planned, but rather I am sighing a lot and feeling a tad tearful. Oh dear. It is entirely my parenting beliefs to blame for my sadness, which is a tad too ironic to be funny considering what day it is today. 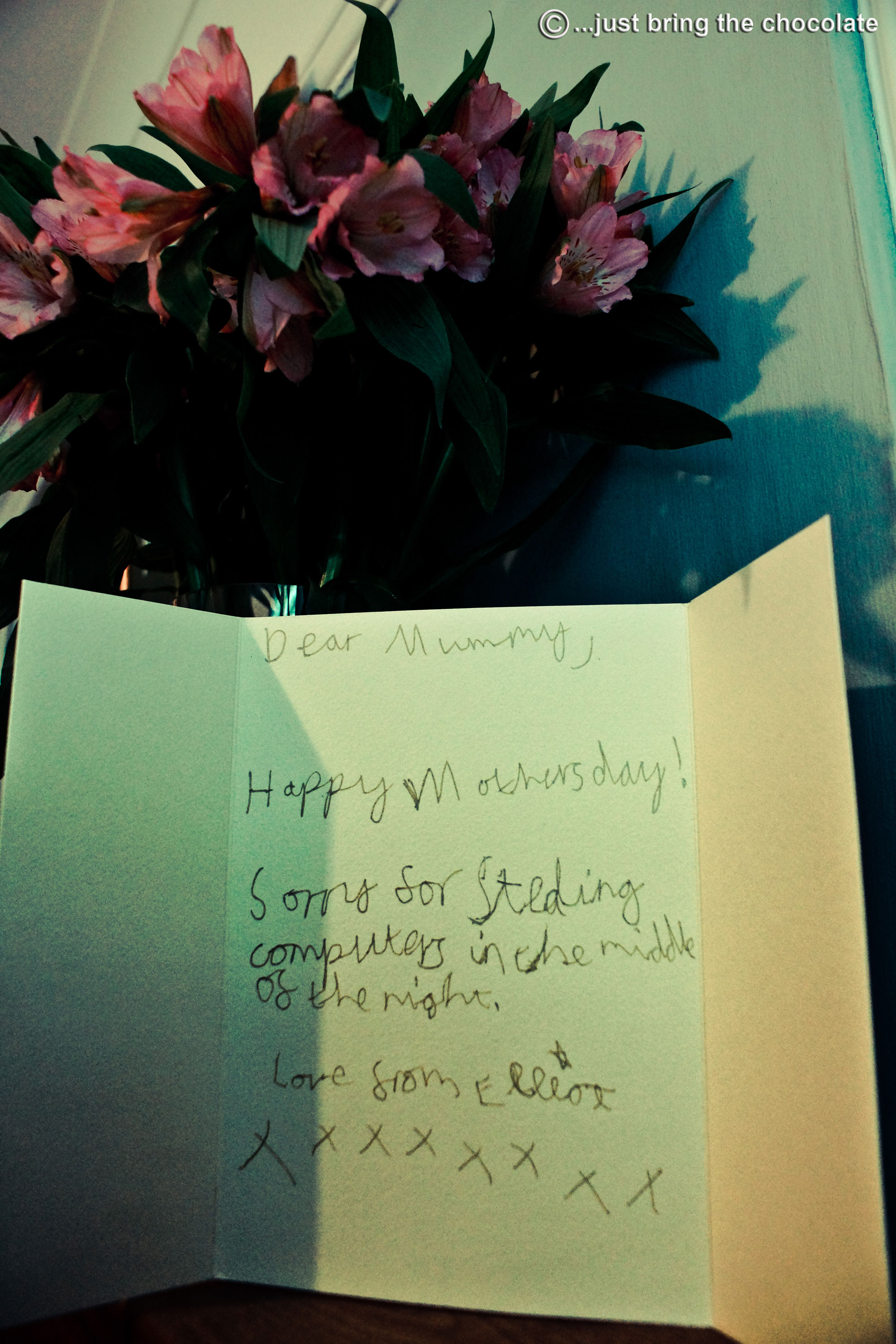 I'm both ashamed and proud of the fact that I sent Elliot away the night before Mother's Day. It broke my heart. Elliot is such a difficult child to fathom. It feels like I am parenting two different children in one body. He is, undoubtedly, one of the sweetest children you could ever meet and still gets genuinely excited about something as simple as seeing me walk into a room. He is my right hand man in the mornings, searching for lost things, carrying feeding pumps down the stairs, letting chickens out in the morning, the list is endless. He does it happily and willingly, and is sweet and caring and just a delight. Then there is the side of him that lies and sneaks about in the middle of the night and takes things that he knows he is not allowed. The caring brother becomes intolerant, frustrated and lashes out. I am not naive enough to expect my children to be perfectly behaved, even if I might wish it sometimes, but the two sides of Elliot are so extreme, and he seems genuinely upset by how much pain he causes me, but then still does it again the following night. I had already gone through the process of enforcing consequences for misdemeanours with no change on his behaviour. Then I tried rewarding him for good behaviour, or at least incentivising him by removing all his possessions with the exception of his clothes and school things and making him earn all his privileges back. This worked very well as temptation was removed, so he was set up to succeed instead of being stuck in the permanent cycle of failing. There is no doubt that it is exhausting as it is parenting micro-management at its most extreme, but it was nice to see him happy to succeed in earning things back and to enjoy some positive attention. Until last night, when Elliot was allowed access to whatever he wanted while I was out, and then took that further and stole the laptop to continue playing it when he should have been in bed.

Since Elliot's descent into the dark side I am in the habit of checking everything is where it should be before I go to bed, so when I returned home and I found the laptop gone, his bedroom was the first place I looked. It did not take me long to find it hidden under his covers. I opened it up and the screen immediately flashed brightly as the last paged that was viewed flickered into life. There in front of me was my PayPal account, and there, typed into the little boxes was evidence of a child having attempted to crack my password to buy himself 12 months membership of some ridiculous site or other. Now I could have patted myself on the back for having a son who was intelligent enough to give password hacking a go, but, having always hoped to be responsible for producing superman rather than Lex Luther, I took it as a personal parental failure and went to bed tearful and worried.

Having concluded overnight that Elliot obviously didn't grasp, or care enough about the consequences of his actions to resist the urge to just please himself, first thing Saturday morning I phoned his father and asked him to change the plans and for him to stay there overnight and not come back until Mother's Day was pretty much over.

Elliot, at 9 years old, grown up in so many ways having experienced things that no child should ever deal with was a little boy when he stood in front of me with giant tears sliding down his face silently accepting his punishment. Gone were the blank emotionless shrugs and "I dunno's" that greeted me when I asked him what he thought he was doing having been discovered red handed. It took everything for me to not crack, he looked so sad and I think my heart actually broke a bit at having to send my own child away when he wanted to be with me so much. But he just quietly nodded as I explained that families exist on trust, and any Mother's Day declarations of love would feel empty in light of him having tried to steal from me the night before.

It has been a strange and rather empty day and I think that I am probably more upset by it than Elliot. Certainly, if his buoyant mood when he walked through the door is anything to go by, he is delighted to be back. Unfortunately what has been a day tinged in sadness didn't improve with his return, in fact it has just taken rather a dip down to the utterly miserable level as, within half an hour of being home, I caught him trying to conceal the fact he had tried to steal Dominic's iPad. He is now wailing in his bedroom, unfortunately probably because he feels sorry for himself at having been caught rather than caring about the consequences of his action for the people around him. That noise, mixed with Roger shouting at Dominic for weeing on the sofa again kind of sums up the day. Do I feel like my role as a mother has been appreciated or celebrated? Ummmm nope, not really. It has however served to keep Mother's Day 'real'. I feel reminded of the dips that this journey can take, and quite how lonely those dips can feel.

I always knew this mothering gig wasn't going to be easy, but little did I realise all those years ago when I was an exhausted single mother with two very young children and a brand new baby that in many ways that was as easy as things got. In just the same way, 5 years later, it is still my sole responsibility to sort the children out, less in a practical way these days, more taking responsibility for helping them untangle and exist happily within the puzzle that is the ethical, emotional and social world they are growing up in. My rising sense of worry is exaggerated, I think, by the sense that time is running out, that once the teenage years are upon us, it will be too late to turn around behaviours that are intrenched. And lets be honest, a large majority of teenagers are loathsome, so it's kind of important to mould him into as pleasant a person as possible to give us a chance of being able to tolerate each other for the next ten or so years.

So anyway, believe it or not, there is a point to my long motherly wail, and it is not simply to depress you all. It actually helps to explain my decision to share some entries from the journal that I kept when the children were younger, started when I was first pregnant with Elliot back in 2002. It has been hugely interesting rereading it after all of this time, and as tempting as it is to fiddle with it, reword things to sound better or correct spelling or grammatical mistakes, I have left it exactly as I found it, as an honest archive of my journey as a mother. That's why I love writing, it gives me a real sense of the ebb and flow that motherhood adopts, bobbing us from great highs, to crushing lows. I listen to the much younger me talking and and feel a great warmth for her and the story she is telling, because it is my story, and I know how that part turns out. It does not help me unravel the next part of this story though, that I will just have to play out and see where it leads me. I have decided to document it honestly though and tell you what we're going through with Elliot. I did not make this decision lightly. I found my way to this decision having been surprised at the comfort I found this Mother's Day, hiding from all the conflict by getting lost in the pages of worries, fears, great joy and devastating lows that are my mothering journey so far. Confidence as a mother is a fragile thing, it depends on so many aspects of our lives reassuring us that we have a firm grasp on all the children as life rushes and buffers us through the twists and turns, and I hope soon that this feeling of losing a grip on one of my little ones will be just a memory, archived with the others as things that map the journey we are all taking.

To see my guest blog post for Great Ormond Street (and please do, it's given me immense pleasure to share) go here, and if you fancy meeting Dominic when he was first born, you might enjoy reminiscing with me in the new category I have set up called Early Days (I will be adding more posts to this section as time goes on).

Another New Journey Begins...
Aspergers (or reasons to shelve that duct tape plan)
The Zulu Principle
Freedom is more than a state of mind, it's a wheelchair
My life with piggy
Shutting Down