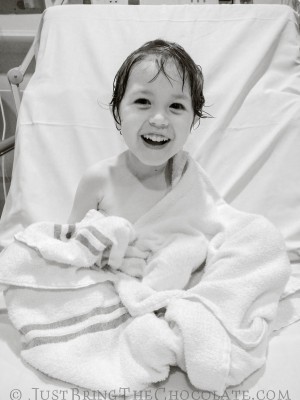 For a child who is as dependant on adults as Dominic is, helping him reclaim an element of control is never a bad thing. How else is he going to develop a sense of his own self-worth if he is never reminded that, even though he is ever so small, he doesn’t have to just let life happen to him?

I have been telling him this for years, trying to combat the shadow of ‘learnt helplessness’ that looms with over all children who can’t follow the normal developmental path towards independence, but as I hear the words falling out of my mouth I am acutely aware that my actions are teaching him a very different lesson. There are many times in our lives where I find myself in the position of having to force him to comply to do things that terrify him. By comply I actually mean pin down when he is screaming and sweating and begging me not to let them do it to him. It is something that I hate doing and only gets harder as he grows up. A little part of me breaks every time I have to look at my child sobbing while I hold him still as he tries to struggle free, old enough to beg me to make them stop, wise enough to know his protests are futile and I will do nothing to protect him from it. So how can I claim to be helping him have any sense of worth when the reality is that I am agreeing to these procedures on his behalf even when I know how out of control and powerless he feels when his objections are ignored?

I know that as he grows up these situations will have to be dealt with in a different way. Dominic’s voice will become more prominent and he will have an important say in what treatment or procedures he will or will not agree to in the future. I want him to be confident enough to challenge the medical professionals if necessary, to not be a passive patient who is a list of symptoms on a medical file for a doctor to play around with. Over the last few years I have spent increasing amounts of time trying to involve Dominic in the decisions that are made about him. Admittedly this is often simply a case of turning off his iPad long enough for me to explain what myself and the doctor have been talking about. This not only serves to remind us of who these decisions effect the most, but also helps check that he is happy with what other people are deciding about his future and gives him the opportunity to question what we think (you’d be surprised quite how often a six going on seven-year old has quite an interesting take on what adults want to do to them). 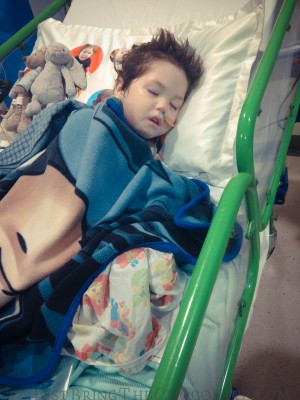 And then things changed. As summer started drawing to an end the surgeon told us that Dominic would need another operation. So, as the other children returned to school for the autumn term, Dominic moved into Great Ormond Street hospital and another long admission began. It would be reasonable to predict that, with age, Dominic would be more aware of what decisions were being made about him each day on the ward and want to be more involved in saying what should happen to him. But time and circumstances have also brought a subtle but noticeable change in Dominic’s attitude towards being a patient and his ability to fight for his right to have an opinion that is valued.

After having gone through the worry of having another big bowel operation (a complete redo of his roux en-y jejunostomy- the same operation that landed him in hospital for 8 months when I first started Just Bring the Chocolate), he then had a run of truly terrible things happen to him that was pretty horrific to watch (let alone stand by and be totally powerless to prevent). Having seen my happy, waggly child reduced to the scared, withdrawn boy that jumped if anyone touched him, I agonised about how to undo the damage that the beginning of the hospital stay had done.

With a bit of prompting and a lot of talking things through (when it’s just us two and not a gaggle of doctors waiting expectantly for an answer), I decided to gently try and hand back a bit of control to Dominic. Suddenly the team of doctors that came to see him were answerable to a small, inquisitive, fed-up child. All the non-urgent medical decisions, I told them, were now in Dominic’s hands, which, as you can imagine, was quite entertaining from my side of the room, but certainly challenged the negotiation skills of Great Ormond Street’s best and brightest surgeons. I think they ended up drawing straws when it was decided that someone had to convince him to agree to an enema (you’ll see what he put the doctors through for even suggesting it to him at the end of the post).

What I wasn’t expecting was just how quickly his confidence grew when he took control of what would and wouldn’t be done to him. It was interesting to observe just how difficult the (normally very confident) doctors found listing reasons why Dominic should let them do something unpleasant that wouldn’t necessarily have any beneficial results at the end of it. Dominic was impressively articulate when questioning their judgement and asked some really valid questions that perhaps should be asked more often before decisions are made for children who can’t query the benefit of them. Indeed, why should he agree to them sticking something up his bottom when they can’t prove that it will do anything to help? 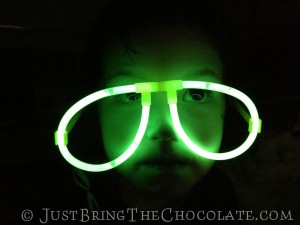 So as Dominic passed another birthday milestone in a hospital bed he began to once again deal with the situation he found himself in with the showmanship and humour that makes him such an amazingly special little boy. I’m not sure if Dominic’s emerging negotiation skills will come and bite me on the bottom later in life, but for the time being it is giving the doctors a run for their money, me a good laugh and a little boy a reminder that what counts is not what obstacles life puts in your way, but the style with which you wheel around them. 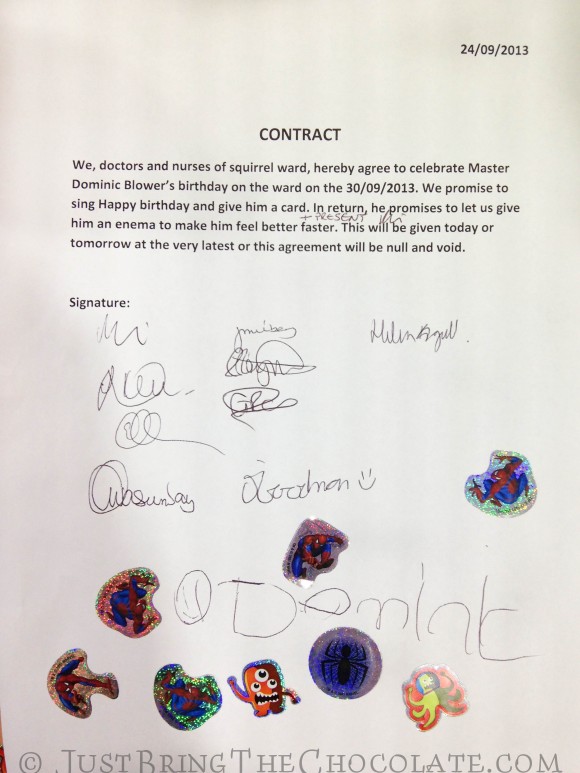 Summer in the City
Freedom is more than a state of mind, it's a wheelchair
The Hardest Post to Share
A Life with Tubes
Parental boundries (Just Bring the Chocolate style)
The Return of the Mad Cat Lady